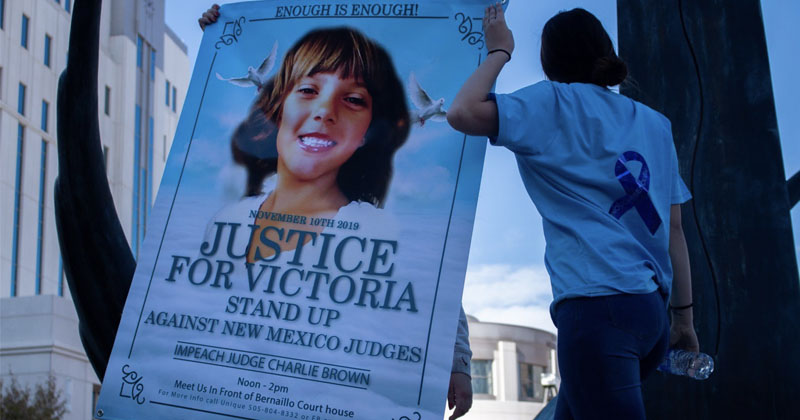 In August 2016 Victoria Martens was drugged with methamphetamine, raped, murdered and then dismembered by a group of drug addicts, including her mother. The shocking case is slowly proceeding through the US courts but a judge has released a key suspect.

Gonzales was one of a group of drug addicts who were there on the night of 23 August 2016 when Victoria Martens – who had turned 10 the day before – was injected with meth, raped, strangled and then dismembered in Albuquerque, New Mexico.

The case has shocked residents in Albuquerque, a city which became synonymous with methamphetamine after it was used as the location for the hit TV show Breaking Bad.

​Gonzales’ girlfriend was Victoria’s mother, Michelle Martens, who has pleaded guilty to child abuse resulting in the death of her daughter but told police her boyfriend’s cousin, Jessica Kelley, had killed the girl.

Police say Martens “liked watching Victoria being raped” by Gonzales and Kelley and “did nothing to stop attack, even though her daughter begged”.

Check out Ludella Awad’s News coverage: Downtown Albuquerque took a big hit with hundreds of people showing up Sunday to protest against the judge’s decision in the release of Fabian Gonzales in the Victoria Martens killing in 2016.

​Martens, 35, told police she used a dating website to find men willing to sexually abuse her daughter while she watched. She now faces 15 years in jail.

Kelley, 31, pleaded no contest to child abuse recklessly causing or resulting in death, tampering with evidence and aggravated assault.

BREAKING: Fabian Gonzales was released from jail on Tuesday afternoon.

​Kelley claimed in her plea agreement that she was “tweaking” and suffering paranoid delusions after taking methamphetamine on the afternoon she agreed to mind Victoria while Martens and Gonzales went out.

She claimed an unknown man came into the apartment and killed Victoria.

​Murder charges were dropped against Gonzales but he still faces charges of child abuse and tampering with evidence.

Last week Judge Charles Brown caused consternation when he agreed to release Gonzales without GPS monitoring after ruling the state had failed to prove he was a danger to the community.

Victoria’s remains were found dead wrapped in a burning blanket.

No date has been set yet for Gonzales’ trial and police say they believe a fourth person was involved in the incident.

A man’s partial DNA sample was found on the little girl’s body and he has been indicted as a “John Doe.”

Prosecutors have appealed against the decision to release Gonzales.

South Dakota has written comedy gold when they decided on their new statewide slogan “Meth. We’re On It.”