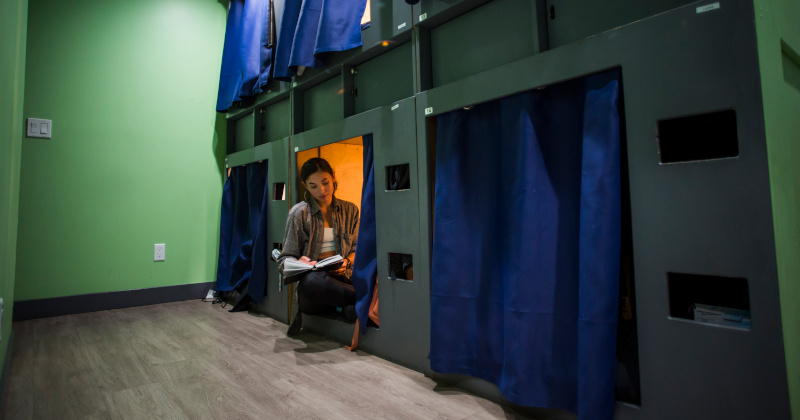 The U.S. is facing an affordable housing crisis as the Federal Reserve continues to inflate home prices with easy money that is far outpacing wages.

Homes in 74% of the country, mostly the large metro areas, are unaffordable for the average worker. At least three-quarters of millennials will never own home as they’re drowning in student debt, auto loans, and credit card debt.

Renting has also become too costly for many in large metro areas like San Francisco. Millennials have already moved into campers and tent cities to escape rising rents, but there could be a new solution called “pod living.”

As of right now, developer Chris Elsey of Elsey Partners in Manhattan, Kansas, is planning to build two apartment buildings in the Mission District that will house tiny apartments and 88 pods.

SFGate reached out to San Francisco’s Department of Building about the project, who responded by saying: “At this point, we have not received any permit applications for the project. Until a developer applies for a building permit and submits building plans for DBI review, we are not in a position to say whether the proposed project will comply with San Francisco’s Building Code.”

Elsey said pod life would have strict rules, including no pod sex and or pod parties.

He said the purpose of the pods are to give millennials a chance to live in a hip part of town for an affordable price, even if that means a 50 sq. Ft. space for about $1,000 per month.

He added: “We’re trying to utilize this below-grade space that has traditionally been used for accessory uses such as bike parking. What’s more important, beds or bikes? I guess it’s up to everybody’s opinion, but my opinion is there’s an incredible housing shortage in San Francisco.”

Elsey is not the first to develop pods for broke millennials – we noted last summer that PodShare had bunk beds for rent in San Diego, Los Angeles, and San Francisco.

PodShare is a co-living space where tenants pay $1,200 a month to rent a "pod," or bunk bed, in one of its San Francisco or Los Angeles locations https://t.co/xnTJ5xONzh pic.twitter.com/ANeKPghTnh

On the East Coast, we noted that “capsule living” has become a popular trend among millennials as 350 sq. Ft. studios in NYC cost upwards of $645,000.

The fascination of tiny homes among millennials is the result of failed policies via the Fed and the government, who’ve allowed home prices to hyperinflate out of the reach of millennials.

We’ve even documented millennials buying shipping container homes on Amazon that cost around $37,000.

The pod life trend is increasing on both coasts – the American Dream is quickly reversing – a sign that wealth inequality in the “greatest economy ever” continues to soar.