Last week, Congress passed a housing bill that gave the Treasury Department a blank check to inject billions of U.S. taxpayer dollars into mortgage giants Fannie Mae and Freddie Mac, snatching them from insolvency. To accommodate this blank check, Congress obligingly raised its debt ceiling by $800 billion. Ouch! That’s nearly a trillion dollars. Why was it necessary to incur this potentially crippling public debt to bail out two completely private, for-profit behemoths, which have run themselves into bankruptcy with their own risky investment schemes? Policymakers said it was essential to maintain the country’s creditworthiness with foreign lenders, which today hold about one-fifth of Fannie and Freddie securities. According to a July 21 report by Heather Timmons in The New York Times:

One out of 10 American mortgages is, in effect, in the hands of institutions and governments outside the United States.1

Ten percent of American mortgages are now owned by foreigners? Doesn’t that defeat the whole purpose of Fannie Mae (the Federal National Mortgage Association) and Freddie Mac (the Federal Home Mortgage Corporation)? They were supposedly set up to fund “the American dream” – home ownership by Americans. Today, American homes are owned by anonymous pools of private investors, many of whom are foreign governments and foreign central banks. How did we manage to give away the farm? And why are we bowing to the interests of foreign investors to the point of driving our own government into bankruptcy? The federal debt is already nearly ten trillion dollars, more than the government can ever possibly repay with taxes.

According to analysts, the bailout of the two mortgage giants is necessary “because America’s relations with a host of countries are intricately tied to Fannie and Freddie,” and because we need to assure “Americans’ future ability to gain access to credit. If foreign companies and governments abandon United States investments, home, auto and credit card loans will be much more difficult to come by.”2

The same sort of argument was once made by U.S. banks to get Third World countries to pay up on their foreign loans. The U.S., it seems, has finally achieved Third World debtor-nation status. For the last half century, the push for “free trade” has been all about preserving profitable opportunities for investment, finding ways to “make money” without actually making anything, exploiting the work of others by buying up corporations around the world and drawing profits off the top. But now the tables have turned. We have gone from being the world’s largest creditor to the world’s largest debtor. We spent our dollars abroad and now they are coming back to shop for our own real estate and corporate assets. Timmons observes:

Asian institutions and investors hold some $800 billion in securities issued by Fannie and Freddie, the bulk of that in China and Japan. China held $376 billion and Japan $228 billion as of June 2007 . . . . Russian buyers hold $75 billion. Sovereign wealth funds in the Middle East are also believed to be big investors in Fannie and Freddie debt.

Sovereign wealth funds (investment funds of sovereign nations and their central banks) are now busily buying up U.S. assets, in what Bill Bonner has called “the biggest transfer of wealth in history.” Writing in The Daily Reckoning on July 11, he observed:

[T]he balance sheet of the U.S. Fed shows $2.3 trillion of US treasury debt held in custody for foreign central banks. The harder the Fed fights the [economic] correction . . . the more money and credit it puts out. This monetary inflation causes prices for oil and imports to rise . . . and more money goes into foreign reserves and Sovereign Wealth Funds in the East, to be used to buy more assets in the West. Thanks to America’s mad monetary policy, these private assets are being taken into public ownership. Some of America’s most important properties are being nationalized . . . but by other nations.3

The ultimate irony is that these other nations may be buying our federal bonds and mortgage-backed securities with money they simply created on a printing press. John Succo is a hedge fund manager who writes on the Internet as “Mr. Practical.” He estimates that as much as 90 percent of foreign money used to buy U.S. securities comes from foreign central banks, which print their own local currencies, buy U.S. dollars with them, and then use the dollars to buy U.S. securities.4 These nations are doing what Congress itself has declined to do: exercising the sovereign right of governments to print their own money.

Unlike the U.S. Federal Reserve, which is wholly owned by a consortium of private banks, the People’s Bank of China (PBoC) is actually owned by the Chinese government. When Chinese merchants, awash with U.S. dollars, cash them in for local currency to pay their workers, the PBoC obliges by swapping dollars for government-issued renminbi. The workers get paid in local currency, and the PBoC gets the dollars for the cost of printing the renminbi. The PBoC then uses the dollars to buy either U.S. interest-bearing bonds or Fannie and Freddie securities, which have conveniently opened up U.S. real estate to foreign investment. In effect, American citizens are paying a foreign government to turn U.S. debt into money, using currency the foreign government issued by fiat (Latin for “let it be” or “so be it” – money simply ordered into existence by the sovereign).

Why doesn’t the U.S. government just issue its own fiat money? That solution may seem radical now, but it could start to look better if Congress has to do what President Roosevelt did in 1933 – declare national bankruptcy and call for a plan of reorganization. There is simply not enough money in the public till to bail out Bear Stearns, IndyMac, and now the private mortgage giants Fannie Mae and Freddie Mac, as well as pay $500 billion annually to service a gargantuan federal debt, and still have enough money left over to repair our failing infrastructure, develop sustainable energy systems, and generally provide for the Common Wealth. The cookie jar is empty, and it is empty because private profiteers have been helping themselves to the cookies.

If the Federal Reserve were made a truly “federal” agency, Federal Reserve Notes (dollar bills) could simply be issued by the U.S. government, instead of being borrowed from a private banking system that creates them with accounting entries and charges interest for the privilege. (See E. Brown, “Putting the ‘Federal’ Back in the Federal Reserve,” www.webofdebt.com/articles, July 26, 2008.) Rather than scrambling to find foreign investors to roll over a $10 trillion debt, Congress could just pay off the debt as the bonds came due, using the same sort of money that foreign central banks used to purchase the bonds in the first place – government-issued national currency. Congress would just be giving them their fiat money back.

As for Fannie and Freddie, they are too big to fail; but they aren’t too big to be nationalized. If we the people are paying the bills, we should get the stock. Fannie Mae began in the 1930s as a truly federal agency, funded by a wholly government-owned bank. The Reconstruction Finance Corporation (RFC) advanced its own federal credit, which was used to fund not only the New Deal but the rapid industrialization that led to victory in World War II.5 The result was to make America the world leader in industry and productivity for most of the rest of the century. It may be time to try that experiment again. The RFC had some flaws, but they could be worked out. That is another subject, to be covered in another article. The bottom line here is that the deed to the farm needs to remain on these shores, and so does the sovereign power to issue money and credit. The existing system of banking and credit creation is teetering on the brink of a collapse brought about by its own internal contradictions and corruption. The system has long since failed in its primary mission of channeling this country’s resources towards investment in a sustainable future. As it stumbles from crisis to crisis, we have neither the time nor the resources to give it yet another chance to do the job. The time has come to clear the boards and begin a new game with new rules. 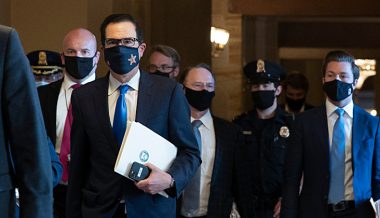