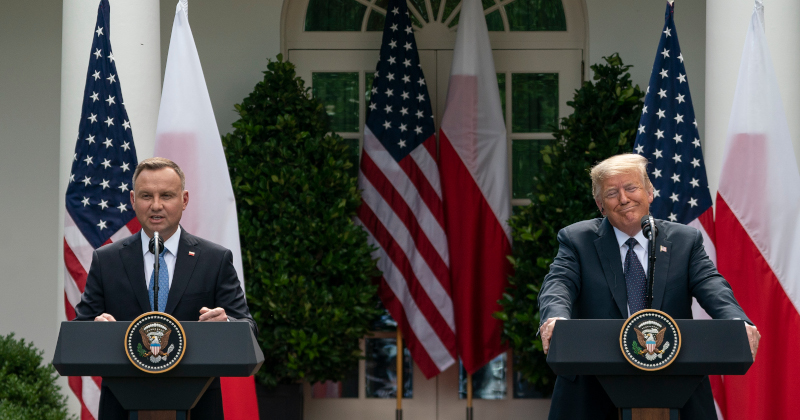 President Donald Trump said Wednesday that the United States plans to move some troops from Germany to Poland, speaking as he hosted Polish leader Andrzej Duda at the White House just four days ahead of Poland’s election.

“We are going to be reducing our forces in Germany” from 52,000 to 25,000 troops, Trump said after an Oval Office meeting with his populist ally Duda.

Duda called it a “very reasonable decision” and said he had asked Trump not to withdraw US troops from Europe “because the security of Europe is very important to me”.

Asked what kind of a message the redeployment sends to Russia, Trump said: “I think it sends a very strong signal.”

Duda’s meeting with Trump came just four days before voters in Poland decide on Sunday whether to give him a second term, and the timing of the meeting was criticised by his opponents as an attempt to gain a pre-election windfall.

Trump, who is seeking to demonstrate that the coronavirus pandemic – which has damaged his own re-election chances – is abating was lavish with his praise of Duda.


The meeting was Trump’s first with a foreign leader since the Covid-19 pandemic, which has left more than 121,000 people dead in the United States, hit in March.

Responding to critics of the timing, Trump said “the people of Poland think the world of him.”

“I don’t think he needs my help,” Trump said.

The main aim of the Polish side ahead of the visit was a boost in US military assistance – a constant demand from Warsaw, particularly since Russia’s annexation of Crimea in 2014.

Trump did not provide any figures for how many US troops would be shifted from Germany to Poland.

He also repeated his frequent accusation that Germany is not paying its fair share of NATO’s defense budget.

According to the Polish newspaper Dziennik Gazeta Prawna, 30 US F-16 fighter jets stationed in Germany could be moved to Poland along with some 2,000 troops.

NATO promised Russia in 1997 not to set up permanent bases in the former eastern bloc.

As tensions have grown however, the alliance has rotated troops through frontline countries.

President @AndrzejDuda after the meeting with President @realDonaldTrump: strengthening of military cooperation between Poland 🇵🇱 & the US 🇺🇸 is of crucial importance to the security of the European Union, the eastern flank of @NATO and most importantly to the security of Poland. pic.twitter.com/gpGrSWYtxs


Even though the US troops would still be rotated under any scenario, Polish officials have raised the prospect of a more permanent US presence – perhaps in a facility paid for by Warsaw dubbed “Fort Trump”.

German Defense Minister Annegret Kramp-Karrenbauer alluded to the agreement with Russia in an interview with the Atlantic Council on Wednesday.

“If for example US troops in Europe are moved to Poland, this must be done with the NATO-Russia pact in mind,” she said. “We must not lose sight of this point.”

The right-wing Duda, who is backed by the governing Law and Justice party, is the current frontrunner in Poland’s election – but the centrist europhile opposition candidate Rafal Trzaskowski has been catching up in the polls.

Trump is also facing a tough re-election battle and is struggling in the polls as he comes under fire for his handling of the Covid-19 pandemic and the nationwide protests for racial justice.

A New York Times/Siena College poll published on Wednesday had his Democratic opponent Joe Biden with a 14-point lead among registered voters.

US Representative Marcy Kaptur, a Democrat from Ohio who co-chairs the Congressional Poland Caucus, condemned the decision to host Duda at this time.

“As a Polish-American and someone who deeply values the US-Poland relationship, I am troubled by President Trump’s inappropriate efforts to insert himself into Polish domestic politics and boost President Duda’s reelection with a White House visit,” Kaptur said in a statement.

“Unfortunately, President Trump’s invitation is not surprising given his favorability toward strongmen and those who undermine democratic institutions,” Kaptur said.

The timing of the visit was also criticised by Molly Montgomery of the Brookings Institution think tank in Washington, DC.

“No US president should meet a foreign leader – friend or foe – mere days before she or he stands for election,” Montgomery said. “To do so undermines Poland’s democratic processes and our own values.”