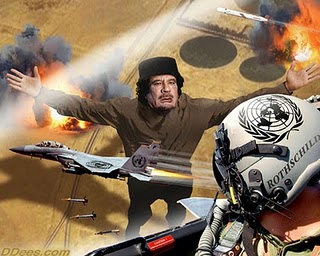 The very policy of targeted assassinations sidesteps any semblance of law, national or international. By extra-judicially executing people, proper investigations, trials, and justice itself is circumvented, diminished, and ultimately undermined as a whole. The United States in particular has become the greatest purveyor of this perversion of what used to serve as the very foundation of its own constitution and its values as a free nation.

NATO’s attack, reported on May 1, 2011, in an attempt to extra-judicially murder Libyan leader Muammar Qaddafi has claimed the life of his youngest son Saif al-Arab Qaddafi, as well as several of his grandchildren. The indiscriminate nature of the attack and the killing of children illustrates in its entirety just why civilized nations have long condemned assassination attempts and the indiscriminate use of military force on non-military targets in the first place.

This latest attack is reminiscent of another targeted assassination attempt by the United States in 1986 that missed Qaddafi but managed to kill his 4 year old adopted daughter Hanna. The corporate-owned media has since played semantics suggesting Hanna was adopted posthumously, seemingly more content with the idea of the murdered 4 year old having no ties to Qaddafi.

The botched assassination attempt comes just days after several US government figures called for Qaddafi’s extra-judicial murder. While these calls are supposedly part of America’s ever expanding mission in Libya to “protect civilians,” it should be noted that according to even the US Department of Defense, no credible evidence had been produced to justify the current military operations, let alone their expansion.

While most informed readers are under no delusion as to what NATO really represents, a supranational military force carrying out a global corporate-financier agenda, even the uninformed must understand by now that NATO, between its endless occupation in Afghanistan, its provocative encirclement of Russia, and now their senseless siege of Libya, has become a global menace, removed from both the national laws that are supposed to govern the civilized use of member military forces, as well as the contrived international laws they claim they act to uphold.

While people in the West may apathetically shrug off the grievous evil being perpetrated in Libya, Afghanistan, Pakistan Iraq, Iran, and a growing number of other nations through the actions of the United States, UK, France and their NATO allies, they must realize that it is only a matter of time before this disregard for the very laws that govern their society will eventually be visited upon them. In many ways in America and Europe, this is already incrementally becoming a reality. Just as the world continuously turned a blind eye to Adolf Hilter and his Nazi war machine as it incrementally violated the sovereignty of both the German people and their neighbors, we stand only to embolden this expanding, reckless tyranny by remaining silent and tacitly complicit in our support of the politicians and corporations behind this dark agenda.

We may not be able to physically stop this unfolding crime against humanity, but we surely can undermine it, day-by-day, purchase-by-purchase, by committing ourselves to a full-spectrum boycott of the corporations involved – essentially anything that is not produced locally. We can also undermine the corrupt, fiat financial machine driving this global menace by replacing our currency with physical precious metals and alternative currencies used amongst friends, families, and coalitions of local businesses. Finally, we can begin to grow our own food and support local farmers, as well as taking up trades and constructive pastime pursuits to reconnect to our roots of independence and self-sufficiency that made the West great.

While we can easily sit idly by doing nothing, claiming that it isn’t our problem, it isn’t our grandchildren being murdered by “precision ordnance,” we must reflect on history and realize that indeed, soon it will be, most certainly and undeniably. We can choose to stand up to this now, or we can experience first-hand tomorrow the bitter agony of loss, death, and destruction that is consuming Libya’s population, as it has Iraq, Afghanistan, and the myriad of nations past and present to feel the sting of repressive global spanning tyranny.

Tony Cartalucci’s articles have appeared on many alternative media websites, including his own at Land Destroyer Report.