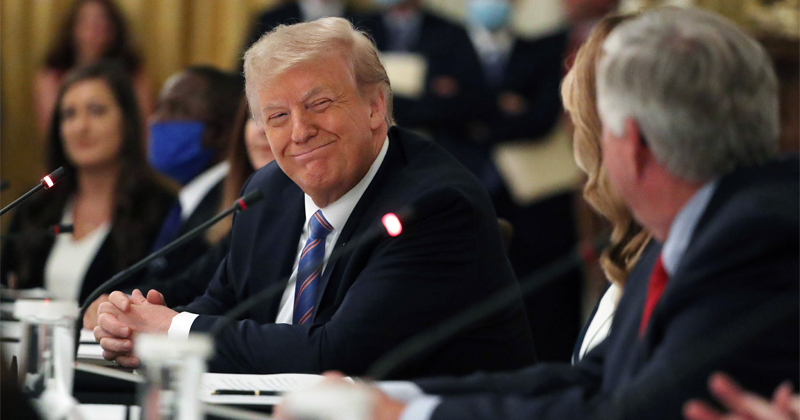 The United States is officially dropping out of the World Health Organization.

Trump notified Congress on Tuesday that the U.S. is leaving the WHO. The departure will take effect in one year.

President Trump had threatened to pull out in late May and made it official shortly after the health organization’s latest coronavirus screw up.

The UN health body stealthily switched its official coronavirus timeline late last week reflecting that not only did China not report the novel coronavirus to WHO, but that WHO changed its story and claimed to have learned of it online instead.

Fox News reports that the switching of the dates pointed out the cozy relationship between the director-general of the World Health Organization, Tedros Adhanom Ghebreyesus, and China’s leaders.

According to multiple reports, the revisions were made on the WHO website on June 29, adding fuel to the fire that the Chinese leadership long purported to cover up the new virus, formally termed COVID-19, and that the WHO assisted them in doing so.

The revised text continues to maintain that on Dec. 31, 2019, “WHO’s Country Office in the People’s Republic of China picked up a media statement by the Wuhan Municipal Health Commission from their website on cases of ‘viral pneumonia’ in Wuhan, People’s Republic of China,” but adds that “the WHO’s open-source intelligence platform also picked up a Chinese-language news report from Finance Sina, a Chinese outlet, about the same cluster of cases in Wuhan, attributed to a ‘pneumonia of unknown cause.’”

Trump Follows Through on Threat to Leave the UN Health Organization

Once you get over the initial surprise that President Trump followed through on his threat you’re left with all the lies and screw-ups and cover-ups by the organization that got COVID-19 wrong from the get-go.

Trump called for the U.S. to get out of the health organization in late May citing its cozy relationship with China.

Because they have failed to make the requested and greatly needed reforms, we will be today terminating our relationship with the World Health Organization and redirecting those funds to other worldwide and deserving urgent global public health needs…

The world is now suffering as a result of the misfeasance of the Chinese government.

Here are just a few things that put WHO on Trump’s sh*t list:

As Reason.org put it, “WHO’s response destroyed much of its credibility, damaged the field of public health, and failed to contain the pandemic.”

Others applauded Trump for having the guts to make good on his threat to get out, after all of WHO’s missteps and chumminess with China.

Trump froze the $400 million the U.S. gives yearly to WHO in April, announced he was taking the U.S. out in May, and in July announced that the U.S. is officially leaving.