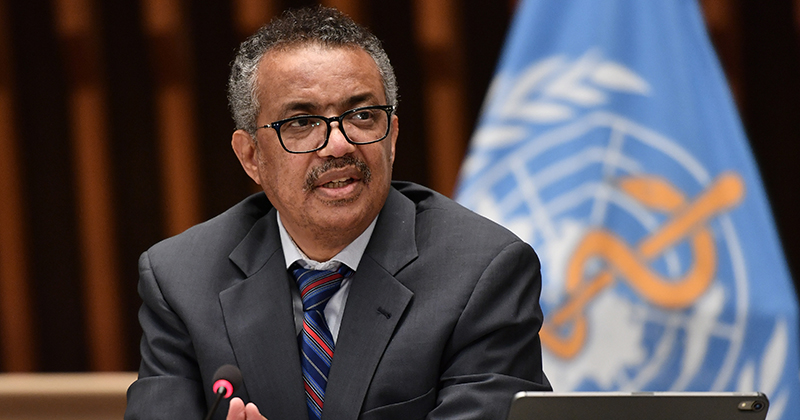 The US has officially notified the United Nations that America is leaving the World Health Organisation, and the process will be completed one year from now on July 6 2021.

However, Joe Biden says that if elected President, he will reverse the decision.

The Trump administration started the formal process of leaving the WHO this week, following the President’s fierce criticism of the health body as being under the “total control” of China.

A WHO official told reporters Monday that “We have received reports that the US has submitted formal notification to the UN secretary general that it is withdrawing from WHO effective 6 July 2021.”

The US gives more than $450m per year to the WHO and currently owes the body $200m, according to reports.

Senator Jeff Merkley, the top Democrat on the Senate foreign relations subcommittee said the development is “a huge win for China and a huge blow to the American people”.

By pulling out of WHO, Trump is delivering a huge win for China and a huge blow to Americans. This move abdicates international leadership to China and ensures that more Americans will get sick. More finger-pointing and blame shifting while Americans die.https://t.co/a21cle67sP

Congress received notification that POTUS officially withdrew the U.S. from the @WHO in the midst of a pandemic.

Joe Biden wrote “Americans are safer when America is engaged in strengthening global health. On my first day as president, I will rejoin the WHO and restore our leadership on the world stage.”

Americans are safer when America is engaged in strengthening global health. On my first day as President, I will rejoin the @WHO and restore our leadership on the world stage. https://t.co/8uazVIgPZB

Meanwhile, the WHO itself stealthily updated a timeline on its website this week, admitting that China never reported its discovery of the coronavirus to the organisation, and that WHO officials learned about it independently when they were finally allowed to visit the country weeks after first requesting to do so.

Breitbart News reported that “The update came after Republicans on the House Foreign Affairs Committee (HFAC) released an interim report on its investigation of China’s response after it discovered cases of the coronavirus in Wuhan.”

This was a failure of monumental proportions and it is imperative that we uncover the truth so we can set up future safeguards to prevent this from happening yet again.https://t.co/bqlImFQmeb

I’m glad to see the WHO and the Chinese Communist Party have both read my interim report on the origins of the pandemic and are finally admitting to the world the truth – the CCP never reported the virus outbreak to the WHO in violation of WHO regulations. The question now is whether the CCP will continue their false propaganda campaign that continues to claim they warned the world, or whether they will come clean and begin to work with the world health community to get to the bottom of this deadly pandemic.

Appearing on Fox News, McCaul charged that the WHO cares less about global health than it does about ‘appeasing China’:

LR @RepMcCaul on @EveningEdit with @LizMacDonaldFOX: “ I believe we need a leader at the @WHO who cares more about global health than appeasing the #ChineseCommunistParty.” pic.twitter.com/KC0z2GjZp1

McCaul says he has repeatedly tried to get information from the WHO about China’s response to coronavirus, but has been met with a brick wall constantly:

“I have repeatedly requested information from the WHO about what they knew and when they knew it, & I would welcome any clarity from them on this. But, so far, they have refused to answer any of those requests.” -LR @RepMcCaul https://t.co/gcMkoCpOnG

In May, scores of countries signed a resolution collectively calling for an independent investigation into the origin of the coronavirus and the reaction of the World Health Organisation.

The WHO has come under intense scrutiny for repeating Chinese claims in January that the virus was not contagious between humans. The body then complained that it was not invited to take part in China’s investigations of the outbreak.

As we highlighted repeatedly, the WHO blocked doctors from urging countries to impose border controls to stop the spread of coronavirus and repeatedly told countries not to close borders, despite this being proven to be an effective way of controlling the spread of the virus.

While not addressing the WHO specifically, President Trump posted several tweets Tuesday slamming the media and Democrats for not acknowledging improvements in the coronavirus situation:

Deaths from the China Virus are down 39%, while our great testing program continues to lead the World, by FAR! Why isn’t the Fake News reporting that Deaths are way down? It is only because they are, indeed, FAKE NEWS!

BREAKING NEWS: The Mortality Rate for the China Virus in the U.S. is just about the LOWEST IN THE WORLD! Also, Deaths in the U.S. are way down, a tenfold decrease since the Pandemic height (and, our Economy is coming back strong!).

“Treatment with hydroxychloroquine cut the death rate significantly in sick patients hospitalized with COVID-19 – and without heart-related side-effects, according to a new study published by Henry Ford Health System. In a large-scale retrospective analysis…

The Democrats would not have BANNED travel from heavily infected China, especially so early, therefore, far more people would have died. Corrupt Joe Biden now admits this!!!

Why does the Lamestream Fake News Media REFUSE to say that China Virus deaths are down 39%, and that we now have the lowest Fatality (Mortality) Rate in the World. They just can’t stand that we are doing so well for our Country!

“COVID-19 (China Virus) Death Rate PLUNGES From Peak In U.S.” A Tenfold Decrease In Mortality. The Washington Times @WashTimes Valerie Richardson. We have the lowest Mortality Rate in the World. The Fake News should be reporting these most important of facts, but they don’t!

Death Rate from Coronavirus is down tenfold!