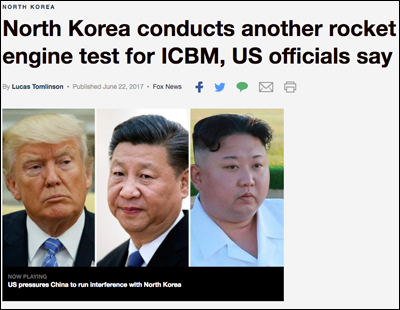 North Korea conducted a new test of a rocket engine Wednesday that could potentially be used to power an intercontinental ballistic missile, Fox News reports.

The report, based off comments from two US officials, says the test was carried out in the city of Yun Song, the site of previous rocket tests.

Wednesday’s test, which follows three others in March, is stoking concern that Pyongyang may be getting closer to obtaining an ICBM capable of reaching the United States.

“There are more people and more cars but nobody knows what that means,” one official told Fox News.

The United States is currently weighing its options as attempts by China to reign in North Korea appear to have been unsatisfactory.

While I greatly appreciate the efforts of President Xi & China to help with North Korea, it has not worked out. At least I know China tried!

“While I greatly appreciate the efforts of President Xi & China to help with North Korea, it has not worked out. At least I know China tried!” President Trump said in a recent tweet.

Tensions have further increased following the death Monday of American college student Otto Warmbier, who was released into US custody in a coma this month after 17 months in prison for the alleged theft of a North Korean banner.