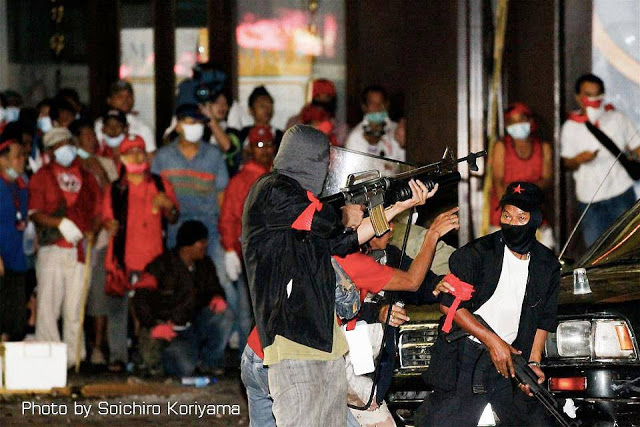 A deadly blast tore through downtown Bangkok on Monday evening as people rushed home from work. Over 15 are reported dead, and over 80 injured, many seriously – missing limbs or sustaining life-threatening injuries.

The bombing is the latest in a string of attacks carried out by US-backed, ousted dictator Thaksin Shinawatra and his violent political front, United Front for Democracy Against Dictatorship (UDD) or simply the “red shirts.” In addition to violent street mobs, Shinawatra has augmented his front with heavily armed militants and terrorists who made their debut in 2010 when 300 of them confronted Royal Thai Army soldiers in the streets of Bangkok, leading to weeks of armed clashes that ended nearly 100 lives and injured hundreds more.

Again in 2013-2014, these militants would be deployed to attack, terrorize, and mass murder protesters marching in the streets to depose Shinawatra’s sister, Yingluck Shinawatra, who held office in his place. Over 30 would be killed, including women and children killed in grenade attacks.

In May 2014, the Thai military finally ousted the Shinawatra regime in a peaceful coup and has since begun dismantling Shinawatra’s terrorist and political networks – much to the displeasure of the US. It was predicted then, based on demographic and strategic analysis, that the “civil war” and mass demonstrations Shinwatra and the Western media threatened Thailand with were all but an impossibility, and that the only option left would be a campaign of systematic terror – terror that has since unfolded.

In early 2015, two powerful bombs would detonate just down the road from the most recent bombing in downtown Bangkok. The bombing was carried out just days after Shinawatra’s red shirts vowed to “create violence like that seen in the South.”

In April 2015, there would another bombing carried out in coordination with a concerted propaganda campaign launched by the Western media to degrade Thailand’s economy. The bombing attacked a popular tourist destination.

There was also a grenade attack on Thailand’s Criminal Court building in a desperate bid to derail moves by the Thai government to hold accountable the Shinawatra regime for its various and egregious crimes committed while in power – the suspect linked directly to Thaksin Shinawatra’s brother, Chaiyasit Shinawatra. The Bangkok Post would report in their article, “Chaiyasit admits knowing suspect, ‘ready to explain’,” that:

Gen Chaiyasit Shinawatra, a former supreme commander and a cousin of former prime minister Thaksin Shinawatra, has admitted he knew one of the suspects in the grenade attack on the Criminal Court, saying the man had once asked him for charity.

It is abundantly clear that Shinwatra’s US-backed political front, unable to muster mobs in the streets and being systematically uprooted from the political landscape of Thailand, has turned to a campaign of terrorism to extort concessions from the ruling Thai government. Many of Shinawatra’s closest allies remain both in Thailand, and prominent members of the political opposition.

The nomination and recent appointment of Glyn Davies as US Ambassador to Thailand was long warned would bring with it political subversion and violence like that seen in Libya, Syria, and Ukraine shortly before large scale US-backed proxy wars erupted.

Before Davies began his career in “diplomacy,” according to his official biography hosted on the US State Department’s official website, he attended and graduated from the National War College in Washington D.C. earning a master’s degree in “National Security Strategy.”

The National War College trains mid-senior military leaders as well as select members of the US State Department. The curriculum includes topics such as “The Non-Military Instruments of Power” which is described as (emphasis added):

There is also “The Global Context,” which is described as (emphasis added):

Course 6500 is to help students understand the world and assess emerging strategic threats and opportunities in the global arena. Students will study selected drivers of international relations, and their impact on a range of nation-states and international regions. Students will examine how states respond to these drivers – analyzing trends and developments within nations, comparing and contrasting regional contexts and national perspectives, and recommending how best to prioritize US interests within and across regions. The course incorporates states, non-state actors and transnational actors in enhancing student understanding of the global context. Through their examination of trends, national responses to those trends, and US responses to changes in the global context, students will develop a working knowledge of the international security context essential for creating, analyzing and carrying out national security strategy and policy.

A War College graduate versed in “non-military instruments of power” being posted in Thailand as US Ambassador as increasingly violent means to overturn the military-led government and its attempts to uproot the Shinawatra regime and the foreign-backed networks propping it up, bodes poorly for Thailand’s peace and stability.

It was reported in NEO Journal in May in an article titled, “US Nominates War College Grad as Ambassador to Thailand,” that:

The worst case scenario sees Davies, just as US Ambassador to Syria Robert S. Ford did in 2011, openly consorting with armed terrorists in a blatantly US-backed attempt to violently overthrow Thailand’s political order. The prospects of a “civil war” in Thailand are impossible. What is possible however, is widespread terrorism aimed at destroying the Thai economy and tarnishing its image both regionally and internationally.

While Thailand possesses several key advantages over Libya, Syria, and Ukraine, primarily the fact that the US and Shinawatra are incapable of fielding military forces capable of challenging Thailand’s territorial integrity, the prospect of a protracted and viscous terrorist campaign aimed at disrupting Thailand’s capital, including tourism and commuting is seen as a point of viable leverage the US can use against the Thai government.

In addition to ousting and uprooting a loyal US proxy, the current Thai government has been gravitating ever closer to China, disrupting long-laid plans to use Southeast Asia as a united front with which the US can encircle and contain Beijing.

Thailand now faces two choices. It can choose like Libya, Syria, and Ukraine did, and allow increasing violence to threaten the peace, stability, and even survival of Thailand as a functioning nation-state, or it can choose as Egypt has done, rounding up all senior and mid-level leaders left in Shinawatra’s political front, as well as those working throughout US-funded NGOs backing them, try and sentence them – forever removing them from Thailand political landscape once and for all.

The terrorism may still continue, but in vain – and while Thailand will certainly become “unpopular” among the so-called “international community” – a term perceived widely to actually mean “the West,” it will at least survive. The current government is already “unpopular” with the West and the prospects of restoring beneficial ties with them have already diminished irreparably.

The world appears to be increasingly descending into a global conflict – albeit fought through fourth generation warfare. Proxy wars, political subversion, and terrorism have replaced the lighting maneuver warfare and deep operations of World War II. By denying this reality, nations like Libya and Syria failed to prepare sufficiently for when one phase of this new warfare shifted into a more deadly variety. Thailand today has examples of how to, and more importantly, how not to navigate through this next phase.

Doubling down its alliances regionally, and removing the vectors of sedition and terrorism the US and its proxies are using within the Kingdom – including the eradication of their client political fronts and US-funded NGOs – appears to have well served those on the front line of this new global war who are still standing.