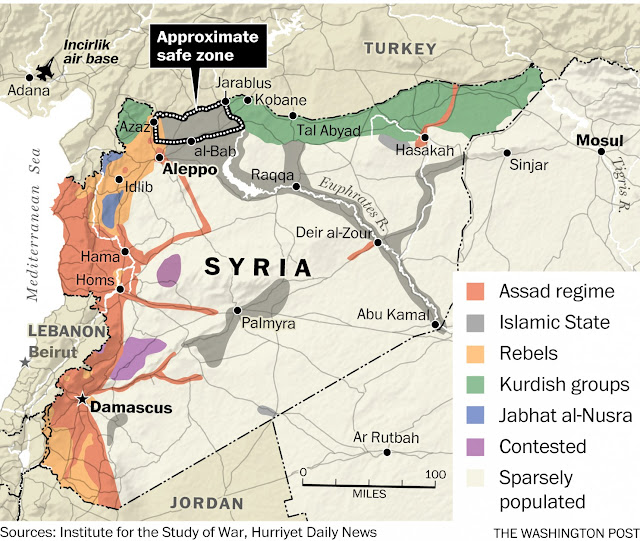 A recentUS Senate hearing regarding Russia’s ongoing air campaign in Syria plumbed dark depths when it was actually proposed by retired US Army General John M. Keane that “free zones” be established for armed militants, and populated with refugees to deter Russian attacks. In essence, General Keane’s plan is to use refugees as human shields, and leverage any attack on this established “free zone” as a means of manipulating public opinion.

The US Strategy Until Now

The recent multinational anti-terror operation led by Russia at the request of the Syrian government has dealt the United States and its narrative regarding its own military intervention in Syria a severe blow.

It has become abundantly clear that not only has the United States been arming and funding extremists inside of Syria, including groups operating in tandem with listed terrorist organizations like Al Qaeda’s Al Nusra Front, it also appears that the US has feigned its campaign against the so-called “Islamic State” (ISIS/ISIL).

While the US now poses as determined to “defeat” ISIS in Syria, just last year talking points circulatedabout instead “containing” the terrorist organization within Syria – essentially letting it ravage the country, degrade the fighting capacity of the Syrian government and hopefully, lead to the collapse of Damascus.

Within the pages of the Brookings Institution – a corporate-financier funded think-tank whose policymakers have helped engineer much of America’s plans now playing out on the global stage – was a report titled, “The Big Questions on ISIS.” It stated:

Should we defeat ISIS? Rather than defeat, containing their activities within failed or near-failing states is the best option for the foreseeable future. The United States has no desire to build nations, and without a stable Middle East, terror groups will continue to find safe haven; if not in western Iraq or Afghanistan, then in Yemen or Somalia. The Middle East and Africa have no shortage of ungoverned or poorly governed territories. The current strategy of prolonged engagement, development and training of local militias, logistic support and air strikes against real targets may be the best solution after all.

However the instability the US claims ISIS is sustaining itself on was created by the US itself as it attempts to violently overthrow the Syrian government, intentionally dividing and destroying the country in the process. “Containing” ISIS in Syria is not unlike an assassin “containing” a poisonous snake under the covers of their sleeping victim until they are bitten and die.

But as abhorrent as it is to create, unleash, and “contain” a terrorist threat within a targeted nation to ravage it, the US seems ready to stoop lower still.

With Russia and its allies setting out to destroy all terrorist groups operating within Syria and making moves to cut them off from their foreign sponsors, the strategy of waging a proxy war as the US has been doing through Al Qaeda, Al Nusra, and ISIS is no longer viable.

At a recent US Senate hearing on Russian strategy and military operations, sitting US Senators, retired generals and representatives from various think-tanks and lobbying groups attempted to produce a response to Russia’s most recent move.

Rather than interpreting Russia’s actions as a welcomed addition to the supposed “War on Terror,” the hearing appeared to interpret the entire Syrian conflict as a mere pawn in a wider proxy war Washington clearly believes it is waging against Moscow. Those attending the hearing admitted to the deterioration of American foreign policy, its global legitimacy and credibility, and the diminishing returns US State Department media operations are having worldwide.

In this context, many of the solutions regarding Syria centered not on how to stop ISIS or restore peace and stability to the country, but rather how to foil Russia’s military operations aimed at terrorist organizations, how to humiliate and turn global public opinion against Moscow.

It was among these discussions that retired US Army General John Keane stated:

If we establish free zones – you know, for moderate opposition forces – but also sanctuaries for refugees, that gets world opinion support rather dramatically. If Putin is going to attack that, then world opinion is definitely against him.  You take this issue right off the table in terms of why he’s in Syria and if you’re doing that [attacking free zones] and contributing to the migration that’s taking place by your aggressive military actions, then world opinion will have some rather – I think – significant impact on him.

One must wonder – if players among US policy circles believe Syrian refugees are pawns of potential use in turning public opinion against Russia in Syria itself, did they not also see them as pawns that could be used to flood Europe and turn public opinion in favor of waging wider and more direct war on the Syrian government itself?

It should also be noted that America’s proposed “free zone” is located in precisely ISIS’ last remaining supply corridor leading from Turkey. Should Syrian and Russian forces finally seal off the border, ISIS’ fighting capacity within northern and eastern Syria would quickly collapse.

An abominable proposition echoing through the halls of one of America’s highest institutions, met with either nodding heads or silent approval, portend the next chapter of American intervention in Syria.

Putin has begun a proxy war with the U.S. when Russian combat aircraft struck, continuously, moderate rebel forces trained by the CIA. This was no accident, targets were provided by the Syrian regime and they were accurate. How can the U.S. stand by and do nothing? U.S. military should have been given the mission to retaliate. Options likely to be considered among others: crater the Al Assad runway, establish free zones that are sanctuaries for refugees, strike Assad’s helicopter fleet that is barrel bombing, just to name a few.

Similar testimony and agreement was also provided by retired US Marine Corps General and former USMC Commandant James Jones, as well as Heather Conley and Stephen Sestanovich representing a milieu of corporate-financier funded policy think-tanks. Their talking points can be heard echoing across the summation of American and European policy circles and in turn, repeated faithfully by the Western media.

Besides American hegemony, what purpose would “cratering” Russia’s airbase in Syria serve? Would that aid in the battle against ISIS? Would it be worth triggering a potential war with Russia to protect militants the entire world has come to understand are in fact terrorists no different or any less dangerous than the ISIS threat itself?

That US policymakers and politicians are not asking themselves these questions before they propose such “solutions” publicly gives the world some insight into the intellectual and moral deterioration taking place within America’s ruling elite itself – which has in turn directly fed the deterioration of American influence, power, and legitimacy globally.

Using refugees as human shields will most likely not turn world opinion against Russia. The practiced liars across the Western media that would be charged with doing the turning, have already entered a terminal crisis of credibility. Instead, General Keane’s suggestions, if taken seriously, will only further compound America’s unraveling global primacy.

For American policymakers, they may want to explore the qualities that actually make a nation great, rather than qualities useful in only creating the illusion of greatness.