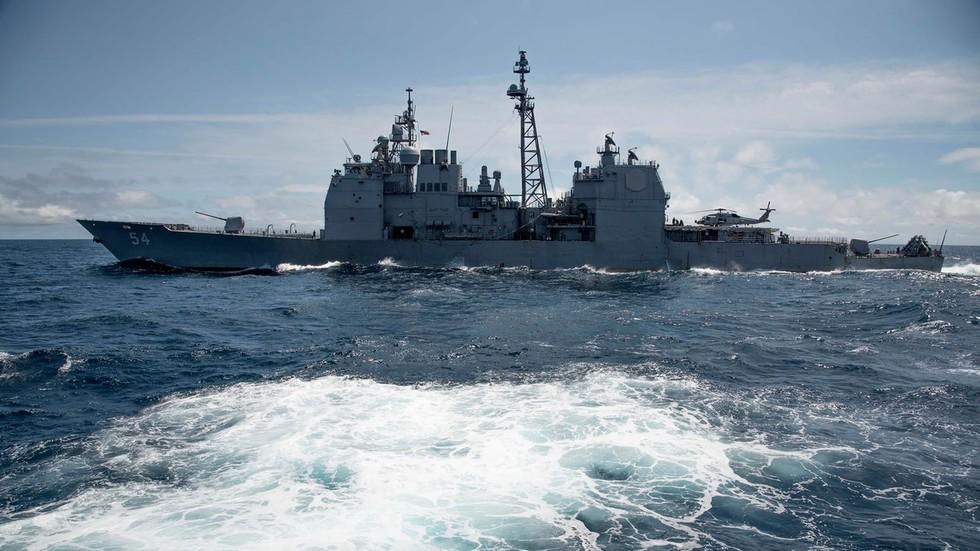 The US military said on Wednesday that a guided-missile cruiser had sailed through the Taiwan Strait just hours after the Chinese military criticized Washington for “adding complexity to regional security” and warned it to stay clear of the island or else risk war.

Trump’s support for Taiwan, which recently was cleared by Congress to purchase over $2 billion in US weapons, is among a growing number of flashpoints in the U.S.-China relationship, which include a trade war, U.S. sanctions and a growing geopolitical conflict in the South China Sea, where China has been expanding its military presence while the United States conducts freedom-of-navigation patrols.

The warship sent to the 112-mile-wide Taiwan Strait was identified as the Antietam. “The (ship’s) transit through the Taiwan Strait demonstrates the U.S. commitment to a free and open Indo-Pacific,” Commander Clay Doss, a spokesman for the U.S. Navy’s Seventh Fleet, said in a statement. “The U.S. Navy will continue to fly, sail and operate anywhere international law allows,” he added, quoted by Reuters.

The defiant move comes shortly after China warned that it is ready for war if necessary, to prevent any attempts to split the island from the mainland, or any push toward Taiwan’s independence, and accusing the United States of undermining global stability and denouncing its arms sales to the self-ruled island.

While the voyage will further escalate tensions with China, it will also be viewed by self-ruled Taiwan as a sign of support from U.S. President Donald Trump’s administration amid growing friction between Taipei and Beijing.

Alex Jones will break down and play all the highlights of the Mueller witch hunt hearing they wish never happened!

While the United States has no formal ties with Taiwan but is bound by law to help provide the island with the means to defend itself and is its main source of arms. Meanwhile, China has been ramping up pressure to assert its sovereignty over the island, which it considers a wayward province of “one China” and sacred Chinese territory.

On Wednesday, Chinese Defense ministry spokesman Wu Qian told a news briefing on a defense white paper, the first like it in several years to outline the military’s strategic concerns, that China would make its greatest effort for peaceful reunification with Taiwan.

“If there are people who dare to try to split Taiwan from the country, China’s military will be ready to go to war to firmly safeguard national sovereignty, unity and territorial integrity,” he said, in a clear warning to the US.

Commenting on the white paper’s implications, China’s notorious twitter troll, Hu Xijin, editor in chief of the nationalist Global Times, said “there are few possibilities and necessities for China to possess military power to provoke the US. But if attacked by the US, China must be able to cause unbearable losses to the US.”

There are few possibilities and necessities for China to possess military power to provoke the US. But if attacked by the US, China must be able to cause unbearable losses to the US. https://t.co/mx3Naqvpui

There are few possibilities and necessities for China to possess military power to provoke the US. But if attacked by the US, China must be able to cause unbearable losses to the US.

In recent years, China has repeatedly sent military aircraft and ships to circle Taiwan on exercises – usually around the time US had sent its own ships in the vicinity – and worked to isolate it internationally, whittling down its few remaining diplomatic allies.