Were anyone to still believe the rhetoric of the so-called “Arab Spring,” one would be admittedly confused over the emerging political landscape in Egypt where the military establishment and the Muslim Brotherhood have emerged from what was supposedly a “pro-democracy” “popular uprising.”

However, if anyone understood that the “pro-democracy” protesters were in fact US State Department-funded, trained, and equipped mobs providing cover for the attempted installation of the Muslim Brotherhood amongst many other potential Western proxies, the current political battle would make perfect sense. 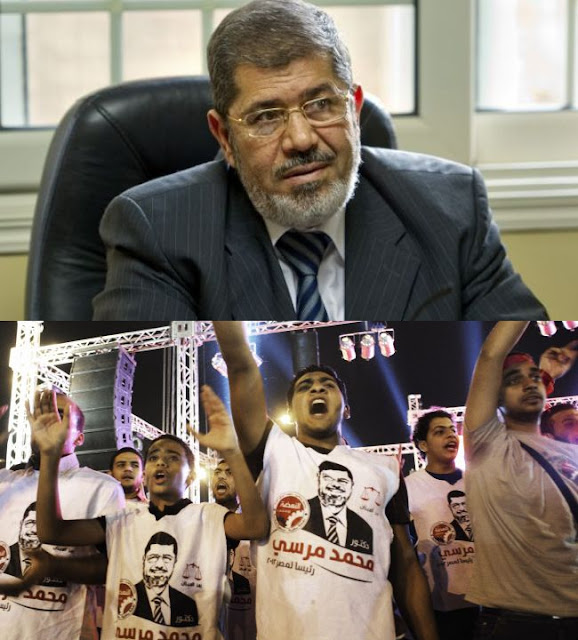 Image:  Mohammed Morsi (above) is the Muslim Brotherhood’s current presidential candidate. As evidence continues to mount against the Brotherhood, implicating them as overt proxies of Western foreign policy, their credibility took another blow as the US State Department’s April 6 Movement endorsed Morsi. Below, Egypt’s youth are once again duped by Western propaganda and fellow Egyptians conspiring against their own nation and people.

The Egyptian military, like in many developing nations, may accept money from the West, may train with Western forces, and may even participate in Western machinations of global domination, but are ultimately nationalists with the means and motivation to draw lines and check the West’s ambitions within Egypt and throughout Egypt’s sphere of influence. The necessity for the West of removing not only Hosni Mubarak who had refused to participate in a wider role against Iraq and Iran, but the grip of the military itself over Egyptian politics and replacing it with the Muslim Brotherhood who is already hard at work in Syria attempting to overthrow one of Iran’s primary regional allies, is paramount.

“Pro-democracy” movements, particularly the April 6 youth movement, trained, funded, and equipped by the US State Department, serve the sole purpose of giving the Muslim Brotherhood’s installation into power a spin of “legitimacy” where otherwise none exists. Those within these “pro-democracy” movements with legitimate intentions will be inevitably disappointed if not entirely thrown under the wheels of Western machinations as regional war aimed at destroying Iran, Syria, and Lebanon’s Hezbollah arch of influence slowly unfolds.

Muslim Brotherhood were, are, and will be Western Proxies

Despite the Brotherhood’s lofty rhetoric, it has from its inception been a key proliferator of Western foreign policy. Currently, the Syrian arm of the Muslim Brotherhood has been involved heavily, leading in fact, the US, Israeli, Saudi, and Qatari-backed sectarian violence that has been ravaging Syria for over a year. In a May 6, 2012 Reuters article it stated:

“Working quietly, the Brotherhood has been financing Free Syrian Army defectors based in Turkey and channeling money and supplies to Syria, reviving their base among small Sunni farmers and middle class Syrians, opposition sources say.”

While Reuters categorically fails to explain the “how” behind the Brotherhood’s resurrection, it was revealed in a 2007 New Yorker article titled, “The Redirection” by Seymour Hersh, as being directly backed by the US and Israel who were funneling support through the Saudis so as to not compromise the “credibility” of the so-called “Islamic” movement. Hersh revealed that members of the Lebanese Saad Hariri clique, then led by Fouad Siniora, had been the go-between for US planners and the Syrian Muslim Brotherhood.

Hersh reports the Lebanese Hariri faction had met Dick Cheney in Washington and relayed personally the importance of using the Muslim Brotherhood in Syria in any move against the ruling government:

“[Walid] Jumblatt then told me that he had met with Vice-President Cheney in Washington last fall to discuss, among other issues, the possibility of undermining Assad. He and his colleagues advised Cheney that, if the United States does try to move against Syria, members of the Syrian Muslim Brotherhood would be “the ones to talk to,” Jumblatt said.” –The Redirection, Seymour Hersh

The article would continue by explaining how already in 2007, US and Saudi backing had begun benefiting the Brotherhood:

“There is evidence that the Administration’s redirection strategy has already benefitted the Brotherhood. The Syrian National Salvation Front is a coalition of opposition groups whose principal members are a faction led by Abdul Halim Khaddam, a former Syrian Vice-President who defected in 2005, and the Brotherhood. A former high-ranking C.I.A. officer told me, “The Americans have provided both political and financial support. The Saudis are taking the lead with financial support, but there is American involvement.” He said that Khaddam, who now lives in Paris, was getting money from Saudi Arabia, with the knowledge of the White House. (In 2005, a delegation of the Front’s members met with officials from the National Security Council, according to press reports.) A former White House official told me that the Saudis had provided members of the Front with travel documents.” –The Redirection, Seymour Hersh

It was warned that such backing would benefit the Brotherhood as a whole, not just in Syria, and could effect public opinion even as far as in Egypt where a long battle against the hardliners was fought in order to keep Egyptian governance secular. Clearly the Brotherhood did not spontaneously rise back to power in Syria, it was resurrected by US, Israeli, and Saudi cash, weapons and directives.

And most recently, as the West frequently does before elections it wishes to manipulate, premature claims by the Muslim Brotherhood of a victory during a presidential runoff were made headlines by the Western media in an effort to portray the Brotherhood as the victors and lay the groundwork for contesting any results other than a decisive win for the West’s proxy of choice.

US State Department-run Radio Free Europe Radio Liberty’s (RFE/RL) “Muslim Brotherhood Declares Victory In Egypt Election,” amongst many other articles attempted to give readers the impression that the Muslim Brotherhood had indeed already won the election. In reality the official tallies had yet to be given and it was merely the Brotherhood’s own rhetoric upon which the report was based. As election results were finalized, and the Brotherhood’s candidate, theUS-educated Muhammad Morsi, appeared not to have the decisive victory claimed by his party and the Western media, immediately accusations of voter fraud were leveled against the Egyptian government. Image: From the US to Serbia, to Egypt and back again, US State Department-funded, trained, and equipped agitator Ahmed Maher poses at the scene of “Occupy D.C.” Ironically, Americans claim Maher and his “April 6” movement have inspired them to rise up against their corrupt government, unaware that his movement was insidiously created by the US government. Photo: courtesy Ahmed Maher, Spencer Ackerman

The West is already combining its various proxy fronts for what it sees as a pivotal showdown and perhaps another opportunity to overthrow any remaining nationalist tendencies within the Egyptian military.  Despite the Muslim Brotherhood, allegedly being a theocratic sectarian party, the antithesis of what the secular April 6 Movement allegedly stood for, Ahmed Maher, the movement’s founder threw his full support behind the Brotherhood.

Maher it should be remembered, had been in the US, Serbia, and back again to the US for a series of training and networking opportunities arranged by the US State Department before during and after the so-called “Arab Spring.” What seemed like politically ideological opposites, between April 6 and the Muslim Brotherhood, in fact share a common denominator – they are instruments executing Western foreign policy.

Libya, Egypt, Syria and Beyond to Form United Front Against Iran

Weakening Egypt before NATO’s assault on Libya was a crucial step in ensuring the latter’s absolute destruction and the creation of what is now a Libyan terror-emirate shipping cash, weapons, and fighters east and west to destabilize and overthrow various governments on the Anglo-American’s long “to-do” list. The West’s ability to install a Muslim Brotherhood government in Egypt, with it’s substantial regional standing and influence would be a serious blow not only to Syria, but to Iran as well. The Muslim Brotherhood in Egypt is already echoing calls by the US and Israel for “intervention” in Syria.

Along with Libya, Egypt and of course the Gulf States of Saudi Arabia, Qatar, the UAE, and with the possibility of the Brotherhood coming to power in Syria as well, a united front against Iran would be formed and prepared to fight a proxy war on the West’s behalf against the Islamic Republic.

Such a reordering has not only been mapped out in US foreign policy documents like Brookings Institution’s “Which Path to Persia?” report, but mirror designs against China where all of Southeast Asia is slated for destabilization, regime change, and realignment to carry out the West’s ambitions to contain and even collapse a rising China.