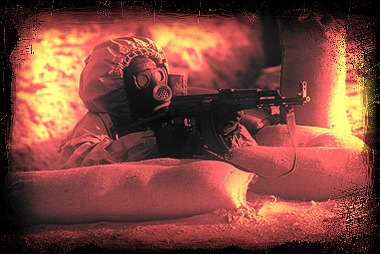 US White House Chief of Staff Dennis McDonough made the unbelievable admission this week that Western interests have concluded Syria carried out an alleged chemical attack in eastern Damascus based on “common sense” rather than “irrefutable evidence.” Slate’s “White House: “Common-Sense Test” And Not “Irrefutable” Evidence Hold Assad Responsible,” states [emphasis added]:

White House Chief of Staff Dennis McDonough went on the Sunday talk shows to drum up support for what he called a “targeted, limited effort” that will change “the momentum on the battle field” in Syria. Yet he also acknowledged on CNN that the evidence that ties Syrian President Bashar al-Assad to the Aug. 21 attack outside Damascus that allegedly killed 1,429 people has more to do with a “common-sense test” rather than “irrefutable, beyond-a-reasonable-doubt evidence.”

And while McDonogh, and his collaborators both in Washington and abroad, claim their planned assault on Syria is not a repeat of Iraq in terms of scale, it is clear that in terms of deception it is.

Now do we have a picture or do we have irrefutable beyond-a-reasonable-doubt evidence? This is not a court of law and intelligence does not work that way.” Meanwhile, McDonough also emphasized on NBC that “nobody is rebutting the intelligence; nobody doubts the intelligence.”

The answer highlights how the White House still has not shown the public a concrete piece of intelligence that directly connect Assad’s regime to the alleged chemical weapons attack, as the Associated Press points out in a detailed story.

The U.S. government insists it has the intelligence to prove it, but the public has yet to see a single piece of concrete evidence produced by U.S. intelligence – no satellite imagery, no transcripts of Syrian military communications – connecting the government of President Bashar Assad to the alleged chemical weapons attack last month that killed hundreds of people.

In its absence, Damascus and its ally Russia have aggressively pushed another scenario: that rebels carried out the Aug. 21 chemical attack. Neither has produced evidence for that case, either. That’s left more questions than answers as the U.S. threatens a possible military strike.

While evidence of who actually carried out the attack remains elusive, what is clear is that the Western interests have made an intentionally baseless claim, echoing the verified lies told during the lead up to the military invasion and decade-long occupation of Iraq, and similar fabrications used to justify the 2011 assault on Libya. 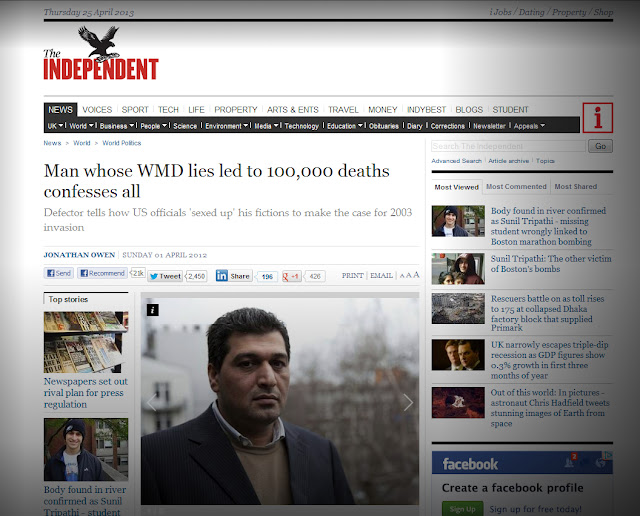 Image: From Independent’s “Man whose WMD lies led to 100,000 deaths confesses all: Defector tells how US officials ‘sexed up’ his fictions to make the case for 2003 invasion.” In retrospect, the corporate-media has no problem admitting the insidious lies that were told to justify the invasion and occupation of Iraq – the lead up to the war was another story. A verbatim repeat of these admitted lies are being directed at Syria amidst the West’s failure to overthrow the government with terrorist proxies.

What is also clear is the documented conspiracy to overthrow the Syrian government and destabilize neighboring Iran and Lebanon with a sectarian bloodbath by directly funding, arming, and otherwise providing material support for sectarian extremist groups aligned with Saudi Arabia, Qatar, and who hold allegiance to Al Qaeda. This conspiracy began under the Bush administration as early as 2007 and has continued onward throughout the Obama administration.

More recently, it would be revealed that the United States, the United Kingdom, and its regional axis including Turkey, Saudi Arabia, and Qatar have sent millions of dollars and thousands of tons of weaponry to a predominantly Al Qaeda led terrorist force operating inside and along Syria’s borders.

For instance, in the Telegraph’s article titled, “US and Europe in ‘major airlift of arms to Syrian rebels through Zagreb’,” it is reported:

It claimed 3,000 tons of weapons dating back to the former Yugoslavia have been sent in 75 planeloads from Zagreb airport to the rebels, largely via Jordan since November.

The story confirmed the origins of ex-Yugoslav weapons seen in growing numbers in rebel hands in online videos, as described last month by The Daily Telegraph and other newspapers, but suggests far bigger quantities than previously suspected.

The shipments were allegedly paid for by Saudi Arabia at the bidding of the United States, with assistance on supplying the weapons organised through Turkey and Jordan, Syria’s neighbours. But the report added that as well as from Croatia, weapons came “from several other European countries including Britain”, without specifying if they were British-supplied or British-procured arms.

British military advisers however are known to be operating in countries bordering Syria alongside French and Americans, offering training to rebel leaders and former Syrian army officers. The Americans are also believed to be providing training on securing chemical weapons sites inside Syria.

“Common sense” would then dictate that with such substantial aid flowing to terrorists operating within Syria, it would be inconceivable for sectarian extremists to overrun Western-backed “moderate fighters” unless of course the summation of Western support was in fact flowing directly and purposefully into the hands of sectarian extremists from the beginning.

These are the same extremists drawn from Al Qaeda, the United States has warned for well over a decade might obtain chemical weapons and use them against a civilian population to achieve their goals. This points the finger directly toward Western-backed terrorists regarding the recent alleged chemical attack in Damascus, not the Syrian government. The attack would enable the United States and its military axis to take a more active and direct role in supporting these terrorist forces who have this past year suffered tremendous irreversible loses against a prevailing Syrian Arab Army.

“Common sense” points the finger in the opposite direction White House Chief of Staff Dennis McDonough has suggested. Without any actual evidence coming from a nation who has waged war habitually on fabricated justification, and who is clearly involved in a long-standing conspiracy to overthrow the Syrian government, and who is responsible for the humanitarian catastrophe it feigns interest in now ending, the world has understandably and universally opposed this latest act of unprovoked military aggression.

Unfortunately, the decision on whether or not the US goes ahead anyway with another act of unprovoked war and 21st century conquest, does not hinge on real common sense or the will of the American people who categorically oppose any military operation, but rather on the compromised, corporate-financier purchased US Congress. In Congress, astoundingly, the lack of evidence is not at the center of debate, but rather what the consequences of America’s proposed military assault might be, and whether the assault should be, in fact,expanded.