Admits Iran is not a threat to either US or Israeli security, devises narrative to sell unnecessary war to public

The corporate media has recently portrayed a narrative where we see the West apparently warning Israel against a unilateral attack on Iran. It appears that Israel is intent on “going it alone” despite the wishes of its “more rational” Western sponsors. Recently, the Wall Street Journal reported in their article, “U.S., Israel Pull Closer on Iran,” that, “Israeli officials, meanwhile, said that President Barack Obama’s public and private acknowledgment of the Jewish state’s sovereign right to defend itself was a crucial gain as the two countries seek to deter Tehran,” in regards to Iran’s alleged nuclear program.

To the average reader, it would seem that both the US and Israel agree that Iran is an imminent threat against which Israel and the United States simply have differing views on how to counter. In reality, this is a premeditated, deceitful act, already clearly articulated since 2009 in a signed document, on how both nations plan on duping the world into accepting an unnecessary war. 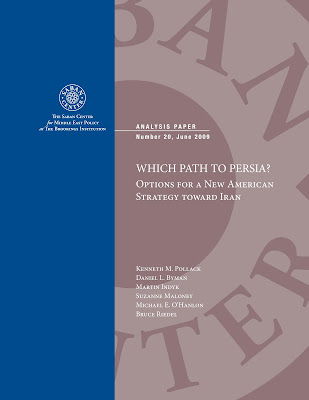 The document, “Which Path to Persia?” published by the corporate-funded Brookings Institute, and signed by Kenneth Pollack, Daniel Byman, Martin Indyk, Suzanne Maloney, Michael O’Hanlon, and Bruce Riedel, who often make their way onto corporate-media networks as “experts,” clearly states that Iran is neither reckless nor likely to deploy nuclear weapons in any way but as a deterrence to Western-led military intervention. The fear is not of waking up one day to a nuclear holocaust with Israel “wiped off the map,” but rather waking up one day and realizing the US and Israel no longer hold uncontested hegemony across the Middle East.

On page 24 of the Brookings Institute report, it is stated, “most of Iran’s foreign policy decisionmaking since the fall of the Shah could probably be characterized as “aggressive but not reckless,”” before adding the baseless caveat, “but Washington cannot categorically rule out the possibility that there are truly insane or ideologically possessed Iranian leaders who would attempt far worse if they were ever in a position to do so.” Such a comment could be just as easily said about US leadership, where Defense Secretary Donald Rumsfeld and Congressman Steve Buyer of Indiana at one point suggested the use of nuclear weapons in Afghanistan against cave-dwelling militants using 30 year-old Soviet weapons. 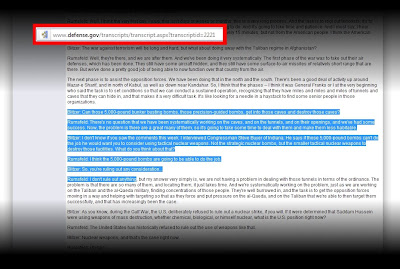 Image: Screenshot taken from Defense.gov where it is admitted that a US Senator proposed using nuclear weapons against Afghanistan with then Defense Secretary Donald Rumsfeld keeping such options “on the table.” While the threat of Iran using nuclear weapons has constituted exclusively of accusations by the West directed at the Islamic Republic, threats of the US using such weapons come directly from America’s leadership itself. (click image to enlarge)

Other US think-tanks, including the RAND Corporation , in assessing the threat of a nuclear Iran, noted that Iran has had chemical weapons in its inventory for decades, and other reportsfrom RAND describe the strict control elite military units exercise over these weapons, making it unlikely they would end up in the hands of “terrorists.” The fact that Iran’s extensive chemical weapon stockpile has yet to be disseminated into the hands of non-state actors, along with the fact that these same elite units would in turn handle any Iranian nuclear weapons, lends further evidence to the conclusion that Iran poses a risk only to US-Israeli hegemony, not their national security.

The Brookings report would then go on to admit it was the intention of US-Israeli policy toward Iran to provoke a war they knew Iran would neither want, nor benefit from. The goal was to create such a provocation without the world recognizing it was indeed the West triggering hostilities:

“…it would be far more preferable if the United States could cite an Iranian provocation as justification for the airstrikes before launching them. Clearly, the more outrageous, the more deadly, and the more unprovoked the Iranian action, the better off the United States would be. Of course, it would be very difficult for the United States to goad Iran into such a provocation without the rest of the world recognizing this game, which would then undermine it. (One method that would have some possibility of success would be to ratchet up covert regime change efforts in the hope that Tehran would retaliate overtly, or even semi-overtly, which could then be portrayed as an unprovoked act of Iranian aggression.) ”

The same report would go on to say:

“In a similar vein, any military operation against Iran will likely be very unpopular around the world and require the proper international context—both to ensure the logistical support the operation would require and to minimize the blowback from it. The best way to minimize international opprobrium and maximize support (however, grudging or covert) is to strike only when there is a widespread conviction that the Iranians were given but then rejected a superb offer—one so good that only a regime determined to acquire nuclear weapons and acquire them for the wrong reasons would turn it down. Under those circumstances, the United States (or Israel) could portray its operations as taken in sorrow, not anger, and at least some in the international community would conclude that the Iranians “brought it on themselves” by refusing a very good deal.”

Clearly those in the West intent on striking Iran realize both the difficulty of obtaining a plausible justification, and the utter lack of support they have globally to carry out an attack even if they manage to find a suitable pretext. Brookings would continue throughout their report enumerating methods of provoking Iran, including conspiring to fund opposition groups to overthrow the Iranian government, crippling Iran’s economy, and funding US State Department-listed terrorist organizations to carry deadly attacks within Iran itself. Despite these overt acts of war, and even considering an option to unilaterally conduct limited airstrikes against Iranian targets, Brookings noted there was still the strong possibility Iran would not allow itself to be sufficiently provoked:

“It would not be inevitable that Iran would lash out violently in response to an American air campaign, but no American president should blithely assume that it would not.”

“However, because many Iranian leaders would likely be looking to emerge from the fighting in as advantageous a strategic position as possible, and because they would likely calculate that playing the victim would be their best route to that goal, they might well refrain from such retaliatory missile attacks.”

Finally, the Brookings report clearly states another option in dealing with Iran is to have Israel carry out what appears to be a “unilateral attack,” but would require sufficient preparations by both nations to make it appear as if there were some sort of political bifurcation between Tel Aviv and the West in the lead up to such an operation:

“An Israeli air campaign against Iran would have a number of very important differences from an American campaign. First, the Israeli Air Force (IAF) has the problem of overflight transit from Israel to Iran. Israel has no aircraft carriers, so its planes must take off from Israeli air bases. It also does not possess long-range bombers like the B-1 or B-2, or huge fleets of refueling tankers, all of which means that unlike the United States, Israel cannot avoid flying through someone’s air space. The most direct route from Israel to Iran’s Natanz facility is roughly 1,750 kilometers across Jordan and Iraq. As the occupying power in Iraq, the United States is responsible for defending Iraqi airspace. ” Which Path to Persia?-page 105 (.pdf)

“From the American perspective, this negates the whole point of the option—distancing the United States from culpability—and it could jeopardize American efforts in Iraq, thus making it a possible nonstarter for Washington. Finally, Israeli violation of Jordanian airspace would likely create political problems for King Abdullah of Jordan, one of America’s (and Israel’s) closest Arab friends in the region. Thus it is exceedingly unlikely that the United States would allow Israel to overfly Iraq, and because of the problems it would create for Washington and Amman, it is unlikely that Israel would try to fly over Jordan.” Which Path to Perisa?-page 106 (.pdf)

“An Israeli attack on Iran would directly affect key American strategic interests. If Israel were to overfly iraq, both the Iranians and the vast majority of people around the world would see the strike as abetted, if not authorized, by the United States. Even if Israel were to use another route, many Iranians would still see the attack as American supported or even American orchestrated. After all, the aircraft in any strike would be American produced, supplied, and funded F-15s and F-16s, and much of the ordnance would be American made. In fact, $3 billion dollars in U.S. assistance annually sustains the IDF’s conventional superiority in the region.”Which Path to Persia-page 106 (.pdf)

The US withdrawal from Iraq is being done in tandem with NATO operations to destabilize Syria and in turn disrupt Hezbollah’s capacity to retaliate against Israel in the event of a strike on Iran – a concern also duly noted within the Brookings report.

“…the Israelis may want to hold off until they have a peace deal with Syria in hand (assuming that Jerusalem believes that one is within reach), which would help them mitigate blowback from Hizballah and potentially Hamas. Consequently, they might want Washington to push hard in mediating between Jerusalem and Damascus.” -page 109 (.pdf)

It is quite clear that eliminating Syria entirely as an obstacle has been instead attempted, and with NATO standing by and a continuous influx of foreign fighters being armed and sent across the border to mire Syrian forces in asymmetrical warfare, any coordinated retaliation against Israel by Syria, Iran, and Hezbollah has been at the very least blunted significantly.

John McCain, who chairs the US State Department-funded International Republican Institute,credited by the New York Times for fueling the “Arab Spring” unrest to begin with, is now calling for US airstrikes on Syria to speed this process up before Russia’s Vladimir Putin begins an expected process of rolling back Wall Street-London gains over the past year.

The recent charade played out by both Israel and the United States in regards with “what to do about Iran,” is merely premeditated playacting, carrying out the directives clearly laid out in the Brookings Institute report, which have been systematically carried out, verbatim, even as it was being published in 2009. There is no real bifurcation between the West and Israel, only an attempt to compartmentalize responsibility for an unwarranted, unjustified, and ultimately unpopular, criminal act of war that may end with millions maimed, killed, or otherwise affected.

We are witnessing an open conspiracy to commit vast crimes against humanity playing out before our eyes, and it is our daily capitulation, our daily sponsorship of the corporations and financier interests driving this abhorrent agenda that allows it to continue on in earnest. Simply “protesting” a war long since decided will not be enough. We must also strike at the very source of power behind Wall Street and London, and it can be done with an act as simple as exposing and boycotting the corporations and financier interests which constitute this murderous global menace.