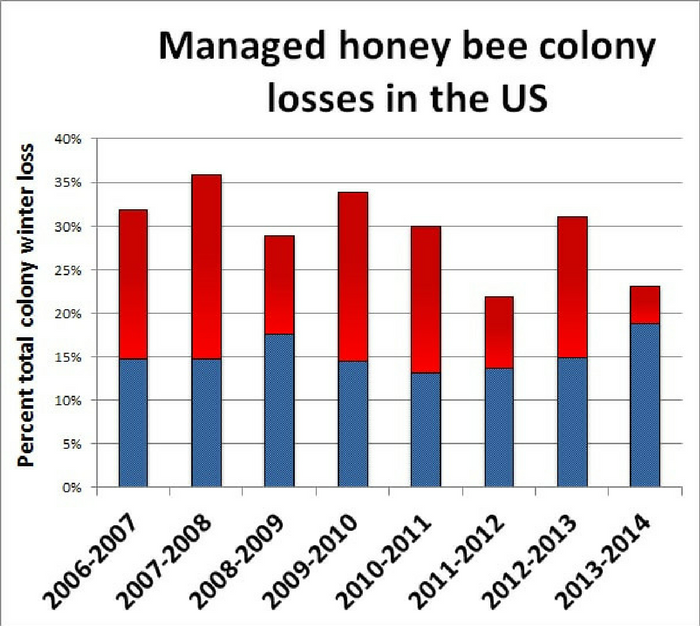 The decline in bee populations and the many threats bees face have been well-publicized. Scientists have been frantically hunting for solutions to the problem. Without bees, we lose much of our food. Without food, well …we don’t want that. Thankfully, there is a bit of good news on the conservation front: honeybee populations are finally on the rise. [1]

Beekeepers started to notice several years ago that fewer and fewer honeybee colonies were surviving the winter. On average, 28.7% of hives survived the winter months. But during the 2014-2015 winter, that number dropped 23.1% and hovered there.

2015 Beekeeper Survey: “We’ve Lost Almost Half Our Bee Colonies in the Past Year”

The latest numbers are encouraging, but honeybees still face substantial threats. According to the report, the top stressor responsible for colony deaths is the varrora mite, little bloodsuckers that were reported in more than 42% of commercial bee hives.

There is even good news there, however. The USDA noted in the report that instances of varrora mites, which first proved lethal to honeybee colonies in 1987, were still down by 11% compared to the 53% of hives ravaged by the bloodsucking insects in 2016.

Still, other threats to colonies persist, including pesticides – particularly a class known as neonicotinoids. The increase in colonies in 2017 is largely due to the constant replenishment of losses, according to the report. [2]

Tim May, a beekeeper in Harvard, Illinois and the vice-president of the American Beekeeping Federation based in Atlanta, said:

“You create new hives by breaking up your stronger hives, which just makes them weaker. We check for mites, we keep our bees well-fed, we communicate with farmers so they don’t spray pesticides when our hives are vulnerable. I don’t know what else we can do.”

The EPA is currently reviewing neonicotinoids, and could ban the spraying of them and dozens of other pesticides in farm fields where bees have been brought in to pollinate crops.

Additional colony stressors identified by beekeepers, among others, include pests other than varrora, diseases, poor weather, starvation, insufficient forage.

May says it’s difficult to figure out for certain what kills bees in any given location. He pondered:

“Maybe it’s pesticides, maybe it’s not. But when I eliminate everything else, it’s a distinct possibility.”