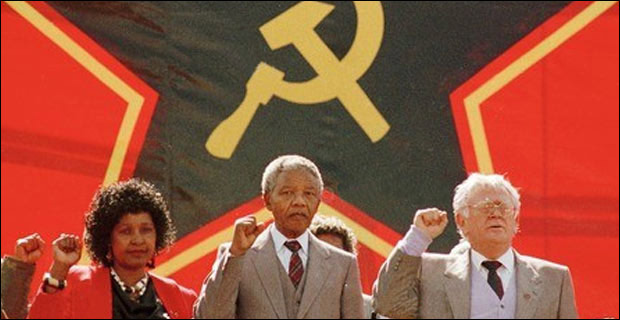 During the years of the 1930′s Popular Front, the Communist International directed the Soviet intelligence-led world-wide agitprop campaign of Communists and fellow travelers of the Left against fascism, while covertly the intelligence services of Nazi Germany and the Soviet Union were secretly cooperating in various sinister endeavors. (See Stephen Koch, Double Lives: Spies and Writers in the Secret Soviet War of Ideas Against the West, The Free Press/Macmillian, Inc., 1994; republished as Double Lives: Stalin, Willi Muzenberg and the Seduction of the Intellectuals, Enigma Books, 2004).

Professor Koch meticulously details the manipulation by the Soviets’ master propagandist Willi Munzenberg of thousands of European and American progressives in the inner-war period of the 1920s and 1930s by his vast publishing network and interlocking front organizations under the covert direction of the Communist International (Comintern) and the Soviet secret services of the NKVD and the GRU. He particularly concentrates upon the intellectual elite that fell under Munzenberg’s sway in this cultural war against the West. This includes such persons as Ernest Hemingway, John Steinbeck, Andre’ Malraux, Andre’ Gide, Pablo Picasso, Dorothy Parker, George Grosz, Lincoln Steffens, John Dos Passos, Bertolt Brecht, Lillian Hellman, Dashiell Hammett and Sidney and Beatrice Webb. 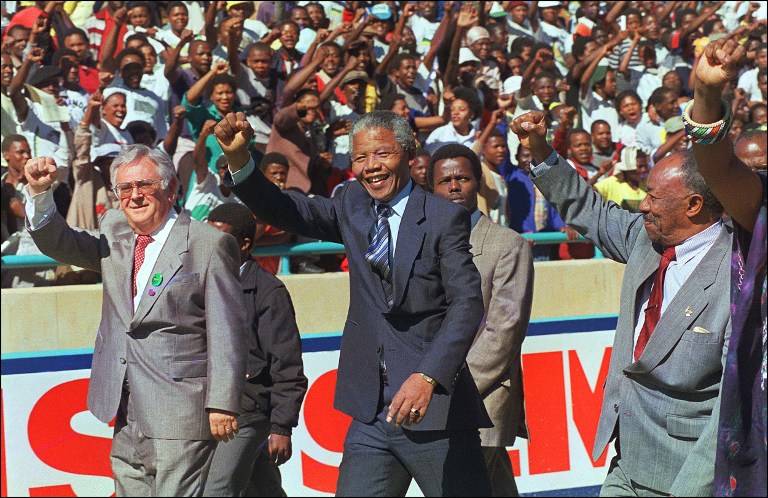 Those in the leadership of the Comintern apparat had a name for those naïve fools who fell for their disinformation propaganda – “useful idiots.”

As this article demonstrates that there are still celebrity “useful idiots” among us.

At the Nelson Mandela Memorial Service President Obama praised Mandela as “the last great liberator of the 20th century” and urged the world to continue his life’s work for justice and equality. What exactly did he mean by this?

Here is a photo [above] of Winnie Mandela, Nelson Mandela, and long-time leader of the South African Communist Party Joe Slovo at an African National Congress rally, 1990. All three are shown engaged in the raised clenched fist salute which for a century has been the salute of Communists. In the background is the hammer and sickle symbol appearing on a red star. This has been the symbol of the international Communist movement since 1917, and was featured on the flags of the Soviet Union, the People’s Republic of China, and Communist parties throughout the world.

Beginning in 1994, the state disarmed the general population so the communist ANC militia could carry out reprisals unchallenged. Under communism, gun control is only for the slave peasants.

Inspired by Communist Fidel Castro’s 26th of July Movement in the Cuban Revolution, and Soviet premier Nikita Khrushchev’s call for “wars of national liberation,” in 1961 Mandela co-founded Umkhonto we Sizwe (“Spear of the Nation”, abbreviated MK) with Sisulu and the Communist Joe Slovo. Becoming chairman of the militant group, he gained ideas from illegal literature on guerilla warfare by Mao and Che Guevara. Officially separate from the ANC, in later years MK became the group’s armed wing. Most early MK members were white Communists; after hiding in Communist Wolfie Kodesh’s flat in Berea, Mandela moved to the Communist-owned Liliesleaf Farm in Rivonia, there joined by Raymond Mhlaba, Slovo and Bernstein, who put together the MK constitution.

Watch this brief YouTube video, Nelson Mandela kill Whites, where Mandela is shown with fellow MK members singing an anthem about killing whites while raising their fists in the Communist salute. After his death, the Communist Party and the ANC confirmed that Mandela was a covert member of the Central Executive Committee of the South African Communist Party at the time he was arrested as a terrorist in 1962.

“At his arrest in August 1962, Nelson Mandela was not only a member of the then underground South African Communist Party, but was also a member of our party’s central committee. To us as South African communists, Cde Mandela shall forever symbolize the monumental contribution of the SACP in our liberation struggle,” the party said in a statement reacting to Mandela’s death.

“The contribution of communists in the struggle to achieve the South African freedom has very few parallels in the history of our country. After his release from prison in 1990, Cde Madiba became a great and close friend of the communists till his last days.”

This was the real legacy of Nelson Mandela.