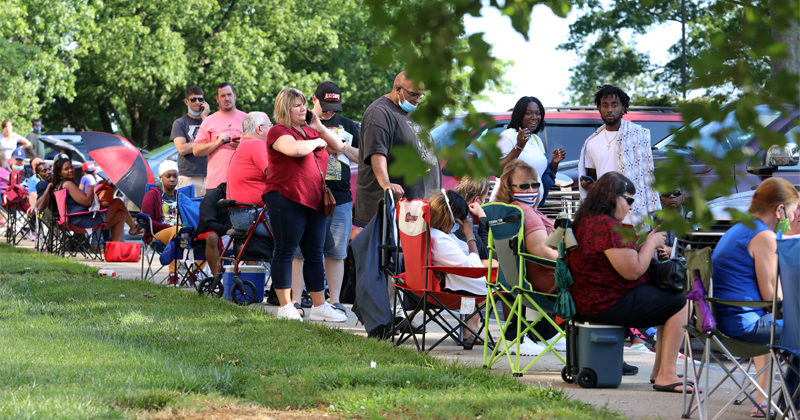 Over the last couple of months, we’ve been arguing that we won’t see a dramatic “v-shaped recovery.”

Even if we cure COVID-19, it won’t cure the economy. But the mainstream has remained optimistic. In his podcast Friday, Peter Schiff points out some of the ways the whole v-shaped recovery narrative is falling apart.

The weekend before last, Peter speculated that we might be close to exhausting the bull market in stocks. Indeed markets were under pressure last week. The Dow was the weakest of the major indexes, falling 3.3%. The S&P 500 and the Russell 2000 were both down about 2.8%. The Nasdaq remained the strongest index, dropping 1.9%.

There has been a significant weakness in bank stocks. The regional banking index was down about 10% on the week and several of the big banks got clobbered, including Goldman Sachs, suffering an 8.65% drop.

Peter said what is dragging on the stock market and really hurting the banks is the economy rolling over.

Most people are focused on the rebound. Peter said they should focus on the relapse.

Meanwhile, the Federal Reserve continues to pump stimulus into the economy. The mainstream remains convinced that this is the only path forward. Otherwise, many companies would fail. Some even call the Fed’s actions “bold.” But Peter asked a poignant question. Why not let them fail? Why not let capitalism work? Because that’s the only thing that will ultimately get us out of this mess.

The international trade deficit in goods came in at 74.3 billion — much higher than expected. A plunge in exports drove that number up. Imports dropped by 1.2%, but exports plunged by 5.8%.

“That really evidences a weakening US economy, even more than just the decrease in imports does because that’s our ability to produce and export.”

This bodes ill for GDP given you subtract the trade deficit from the GDP number. It will also weigh heavily on the dollar. Peter dug into this in-depth when he broke down the “dollar milkshake” theory.

“There’s a glut of dollars because of our enormous trade deficit which is getting even bigger. We are flooding the world with dollars that the world does not need to buy American exports.”

Retail and wholesale inventories were also down. Some people spun that as good news, arguing it would boost future GDP as companies work to rebuild those inventories. But Peter said he doesn’t think that will happen.

“I think they can read these rather obvious tea leaves. They don’t need the inventories because they can’t sell them. I mean, not for a high enough price. Right now, a lot of companies are just having to mark stuff down because it’s the only way they can move the merchandise. So, I think a lot of these stores  – and more store closures are being announced every day, more bankruptcies are being announced every day – bankrupt stores don’t need more inventory.”

Peter also talked some politics, discussing the odds of the Republicans holding on to the White House and Senate, and the push to make Washington D.C. the 51st state.