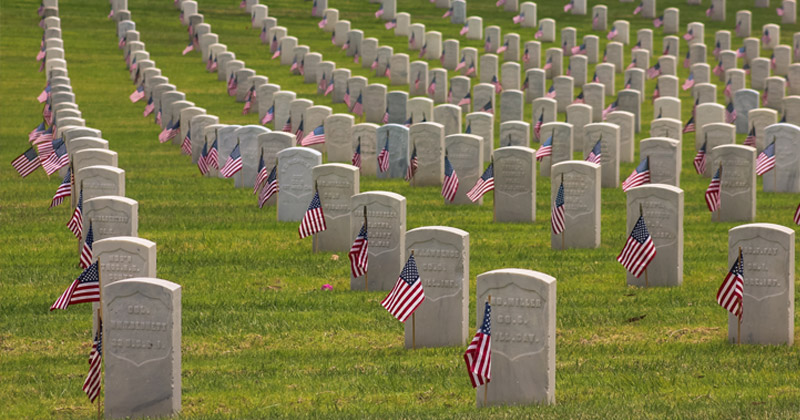 Thanks to coronavirus, The United States Department of Veterans Affairs (VA) is prohibiting the Boy Scouts, Girl Scouts and other groups from placing American flags on the graves of fallen U.S. veterans.

The longtime Memorial Day tradition is meant to honor those who gave the ultimate sacrifice to our country.

Due to fears surrounding coronavirus, the VA has banned any public events whatsoever from taking place at military cemeteries.

Those two cemeteries are located in Suffolk County, which is in County Executive Steve Bellone’s district.

Bellone told Fox 7, “If we can’t figure out a way to make sure we are placing flags at their graves to honor them, then something is seriously wrong.”

“What we’re asking the VA to do is, rather than have a blanket policy across the country, allow the national cemeteries at the local level, to make this determination in conjunction with the local health department,” he continued. “We will take the responsibility to say that this flag placement plan meets the state and national guidelines but give us that opportunity to do it, allow us to honor our fallen heroes.”

“We just commemorated VE Day, this is the generation that lived through the adversity of the great depression, they won World War Two. What is it going to say about our generation if we can’t figure out a way to honor the greatest generation by placing flags at their graves on Memorial Day?” asked Bellone.

Texas Attorney General Ken Paxton spoke out against the decision, writing on Twitter, “Let them honor the veterans who gave all. Flag of United States.”

Let them honor the veterans who gave all. 🇺🇸 https://t.co/u745LuMoon