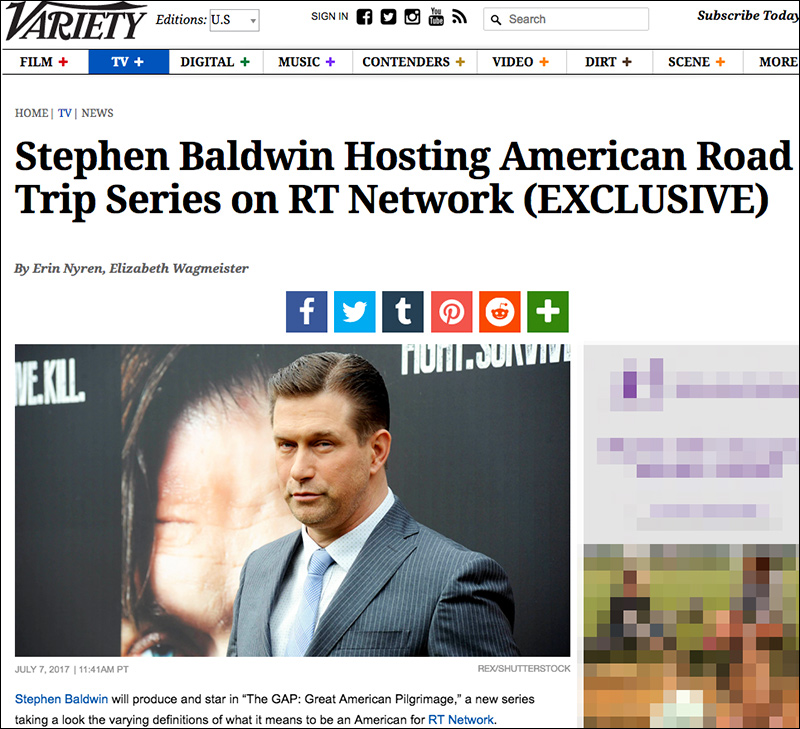 Variety.com claimed it had an “exclusive” report on Stephen Baldwin and Max Keiser’s new RT show, but listeners of the Alex Jones Show got the scoop nearly two weeks prior.

In a July 7 article entitled, “Stephen Baldwin Hosting American Road Trip Series on RT Network (EXCLUSIVE),” Variety reported on the new series, “The GAP: Great American Pilgrimage,” in which Keiser will film a road trip with Stephen Baldwin across America:

Baldwin and co-producer Max Keiser will hit the road in an RV to examine the different ways that people believe, perceive, and live out what it means to be an American by bringing their platform to underrepresented communities.

Despite Variety’s claims that it broke “exclusive” news, Keiser actually revealed his new show on the June 23 edition of the Alex Jones Show.

Max Keiser: Well, Alex I’ve got some exclusive news for you, that’ll be the first time anybody’s ever heard of this, and it’s a follow-up to what you just described as the Democrats, the Civil War, the backlash after the election from mainstream media against anyone who is supporting the president, and the complete kind of blackout from hearing the voices of ordinary Americans out there who, you know, were instrumental in this election and their voices are not heard.

So this is the news: I’m working with my friend Stephen Baldwin, who I’ve known for thirty years. We’re in pre-pre-stage development, pre-development of a new RT show that will go into the heartland. And Stephen and I are going to go, this’ll be in addition to my Keiser Report Show. This is a new show in addition to my Keiser Report show on RT, and we’re going to travel into America and we’re going to talk to folks and let them speak, let them tell the world what they’re thinking, because nobody in mainstream media in America is allowing that kind of thing to take place.

So it’s a very exciting new media show, a new media project and we’re in pre-production. RT’s on board, Stephen’s on board…

As usual, you heard it here first folks!