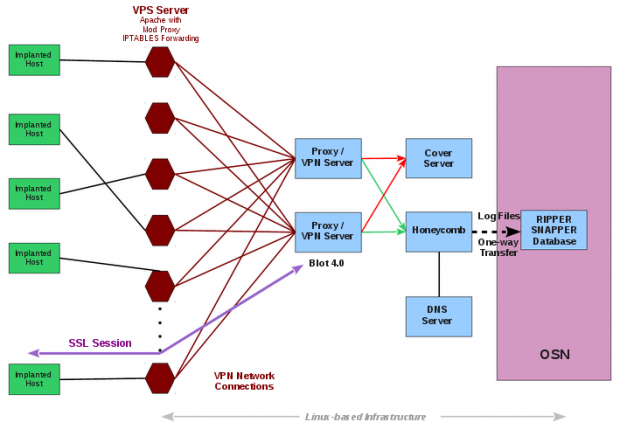 The source code, according to a press release from the anti-secrecy organization, is intended to “enable investigative journalists, forensic experts and the general public to better identify and understand covert CIA infrastructure components.”

“Source code published in this series contains software designed to run on servers controlled by the CIA,” WikiLeaks writes, stressing that the material does not contain 0-day or undisclosed vulnerabilities that could be utilized by others.

“Even the most sophisticated malware implant on a target computer is useless if there is no way for it to communicate with its operators in a secure manner that does not draw attention,” WikiLeaks writes. “Using Hive even if an implant is discovered on a target computer, attributing it to the CIA is difficult by just looking at the communication of the malware with other servers on the internet.”

“Hive provides a covert communications platform for a whole range of CIA malware to send exfiltrated information to CIA servers and to receive new instructions from operators at the CIA.”

While the source code for Hive is unlikely to do little more than assist forensics analysts, the code for more powerful tools in Vault 7, if released, could potentially enable malicious attackers.

These latest leaks, likely from the same source as the Vault 7 files, are believed to have originated from a CIA employee or contractor.

In April of last year it was learned that a joint investigation by the FBI and CIA had begun looking into hundreds of agency members who would have had access to the material.

That same month CIA Director Mike Pompeo criticized WikiLeaks and its founder Julian Assange during his first public speech as head of the agency.

“Assange and his ilk make common cause with dictators today,” Pompeo said at the time. “Yes, they try unsuccessfully to cloak themselves and their actions in the language of liberty and privacy; in reality, however, they champion nothing but their own celebrity. Their currency is clickbait; their moral compass, nonexistent.”

While Attorney General Jeff Sessions appeared to hint at the alleged charges during a press conference that month, Assange’s lawyer, Barry Pollack, stated that the Department of Justice has not attempted to make contact.