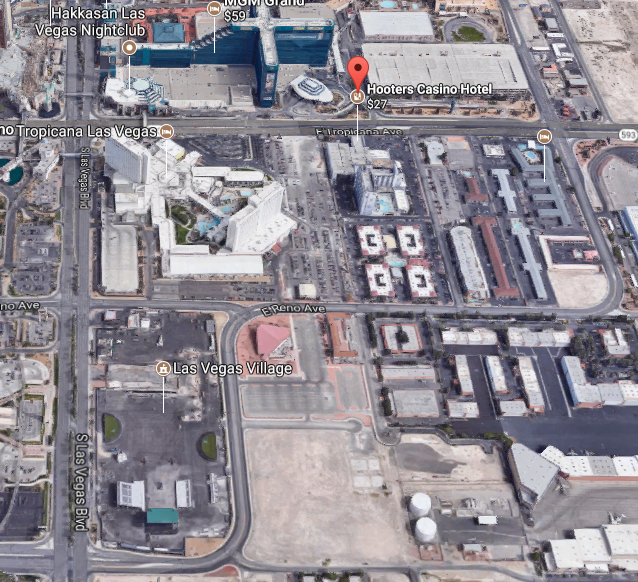 LAS VEGAS (INTELLIHUB) — On the night of October 1, Youtuber Benjamin Franks and his friend had just grabbed some tacos and were heading back to their hotel room at the MGM when they noticed a separate disturbance at the corner of Las Vegas Blvd and Tropicana Ave.

“It must have happened at Hooters dude because they are all showing up there,” he said. “It looks like most of them are at Hooters.”

Hooters Casino and Hotel is located at 115 E. Tropicana Ave. which is just northeast of the venue where the Route 91 Music Festival was being hosted.

Franks’s footage is absolute proof that the Las Vegas Metropolitan Police Department and the FBI are lying to the general public and have not been forthcoming about all of the events that occurred that night.

“Me and my buddy went to vegas for two days. This was our first day there and had been out on the strip earlier but drove to circus circus later on. We had just gotten tacos when we finally reached tropicana and las vegas blvd is when we saw everyone running and all the police. We were lucky to get to the mgm parking garage and into our room about 15 minutes later and thats when this video starts. WE HAD NO IDEA WHAT WAS GOING ON,” the Youtuber wrote in his Oct. 21 post.

Astonishingly, this all dovetails with an Oct. 14 Intellihub report which documents how an eyewitness explained in a radio interview that one of his girlfriend’s friends witnessed a ‘solo SWAT guy’ enter the back door of Hooters.

In the article I wrote:

A few moments later (after the gunfire in the venue subsided), Rick met back up with all five members of his group near a sign that they used for a “landmark” which was located between Hooters and Motel 6 which is when a “frantic stampede” fled Hooters.

“[…] there was a bunch of people trying to get the hell away from Hooters so we did too,” he explained. “So we started running again.”

Rick also pointed out that at one point he had witnessed “SWAT” guy enter Hooters through the back which he thought was suspicious. The scene was fluid and rapidly changing. Nobody could be trusted.

According to Rick, the scene was fluid and rapidly changing. Nobody could be trusted. At one point, the group was told that a shooter had stolen a police car which elevated concern.

The “HighImpactFlix” YouTube channel has condensed the footage in an excellent presentation of the facts.

Shepard Ambellas is an opinion journalist, analyst, and the founder and editor-in-chief of Intellihub News & Politics (Intellihub.com). Shepard is also known for producing Shade: The Motion Picture (2013) and appearing on Travel Channel’s America Declassified (2013). Shepard is a regular contributor to Infowars. Read more from Shep’s World. Follow Shep on Facebook. Subscribe to Shep’s YouTube channel.