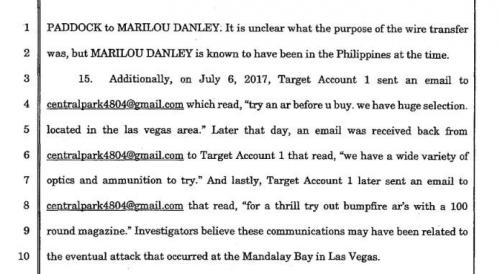 The gunman who opened fire on a Las Vegas music festival from the Mandalay Bay Hotel and Casino was an arms dealer, and his girlfriend handled his ammo and helped him load magazines, according to search warrants unsealed by a judge on Friday.

Multimillionaire real-estate developer and video-poker aficionado Stephen Paddock, 64, unleashed a hail of bullets into the crowd at the Route 91 Harvest Festival from the 32nd floor of Mandalay Bay on the night of October 1, 2017, killing 58 over a 10 minute period before reportedly shooting himself in the head.

After investigating Paddock’s computer, cellphone and electronic devices, investigators found no obvious or ideological motive, however we now know he sent at least two strange emails, possibly to himself, discussing firearms.

“Investigators have been unable to figure out why Stephen Paddock would be exchanging messages related to weapons that were utilized in the attack between two of his email accounts. Conversely, if the Target Account was not controlled by Stephen Paddock, investigators need to determine who was communicating with him about weapons that were used in the attack,” according to a warrant.

In an email sent from Paddock’s Microsoft Live email account, “[email protected]” to “[email protected],” Paddock wrote “try and ar before u buy. we have huge selection. located in the las vegas area.” The “centralpark4804” account wrote back “we have a wide variety of optics and ammunition to try.” Paddock emailed back “for a thrill try out bumpfire ar’s with a 100 round magazine.”

According to some, this is the first information on the record suggesting that the gunman may have had help.

The warrant goes on to read “Investigators believe these communications may have been related to the eventual attack that occurred at the Mandalay Bay in Las Vegas.”

Investigators found 23 firearms in Paddock’s room – several of which were outfitted with “bump-fire” stocks, a large quantity of ammunition, high capacity magazines, a handgun, a bulletproof vest and a “breathing apparatus” in Paddock’s room. 1,600 round of additional ammunition along with 50 pounds of explosives and ammonium nitrate – often used to manufacture explosives, were found in his Hyundai Tucson SUV. Investigators say he planned to survive the assault and escape, and had set up several surveillance cameras in various locations throughout the room, the peep hole of his door, and in the hallway outside. 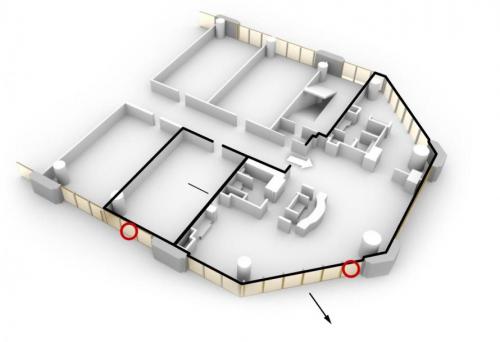 There is no closed-circuit video of Paddock bringing the guns up to his room, while a valet at Mandalay Bay says Paddock “didn’t have any crazy bags with him” that he could remember. Perhaps the lack of security footage is explained by “camera/equipment malfunctions” reported by Mandalay Bay after a mid-September 2017 theft of marketing materials from a convention at the hotel.

Paddock also reportedly attempted to buy a large quantity of tracer ammunition in the month prior to the attack, however the dealer he approached did not have any in stock.

While breaching Paddock’s room at approximately 10:55 pm, an officer accidentally fired one round from his sidearm, reportedly not hitting anyone. Paddock, meanwhile, was found laying awkwardly over a rifle with what investigators reported to be a self-inflicted gunshot wound to the head. Oddly, recordings of the incident do not contain Paddock’s final “suicide shot.”

Of note, investigators say there were 200 shots fired into the hallway through the door of Paddock’s hotel room: 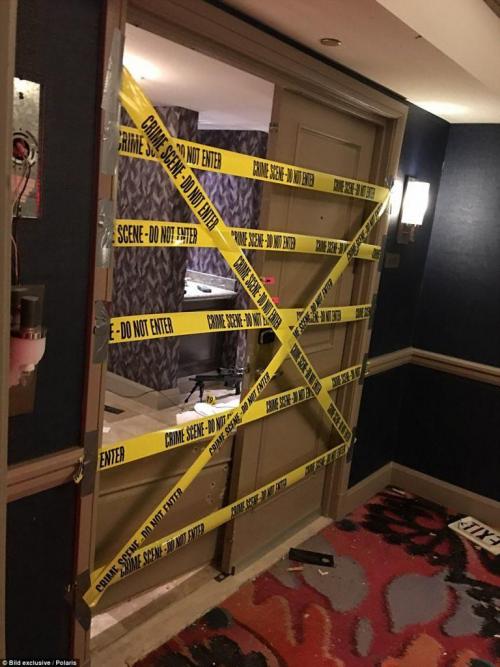 The search warrant also reveals that Paddock’s girlfriend, Marilou Danley, told authorities that they would likely find her fingerprints on some of the ammunition because she sometimes assisted him in loading it into magazines. While there was no evidence at the time of criminal involvement by Danley, investigators had not ruled out the possibility on October 3, two days after the shooting.

In addition to Paddock’s email accounts, investigators sought Danley’s email, Facebook and Instagram accounts, who was in the Philippines during the Oct 1 shooting. Paddock wired $100,000 to Danley the week before the shooting.

In an odd twist to the already very murky shooting, a 21 year old concertgoer reported that a woman “pushed her way forward into the concert venue, into the first row” who told people “you’re all going to die” about 45 minutes before the shooting began.

U.S. District Judge Jennifer Dorsey unsealed the warrants on Friday, as she said she saw no reason to keep them sealed – however 10 pages were withheld pending a hearing in state court Tuesday morning.