Officer Larry Hatfield, spokesman for the department, first mentioned that nobody had opened a missing persons file on Campos, and suggested that his employer MGM was aware of his location.

“He’s a private citizen. Let me put it this way,” Hatfield explained. “If you were getting bombarded by media attention from people like [independent journalist] Laura Loomer, it’s your choice not to disclose your location, that is your choice.”

“But that does not make you a missing person. And the fact that the media is reporting you are missing, that is the media, not the police.”

MGM told the Las Vegas Review Journal it knows where Campos is, and he’s just shy of the media.

“Jesus Campos wants to tell his story at a time and place of his choosing. He’s asked that everyone respect his request for privacy,” MGM said in an email to the newspaper. “We could not be more proud of Jesus.”

Loomer visited Campos’ home earlier this month to find the property guarded by a private armed security firm, suggesting Campos and his family may be under a gag order.

.@MikeTokes & I were not allowed inside the @LVMPD @FBI #LasVegasShooting press conference today. We're in the lobby. Officer blocking door. pic.twitter.com/Oq3c4zWD2u

Lombardo even went as far as to block Loomer on Twitter.

“The LVMPD and the FBI are trying to make sure that what happened in Vegas stays in Vegas,” Loomer said in a statement to Infowars.

“Not only are they participating in a full blown misinformation campaign, which I proved through my exclusive report about the official timeline discrepancies, but they are also concealing the true identity and status of ‘hero security guard’ Jesus Campos from the public.”

Read her full statement below: 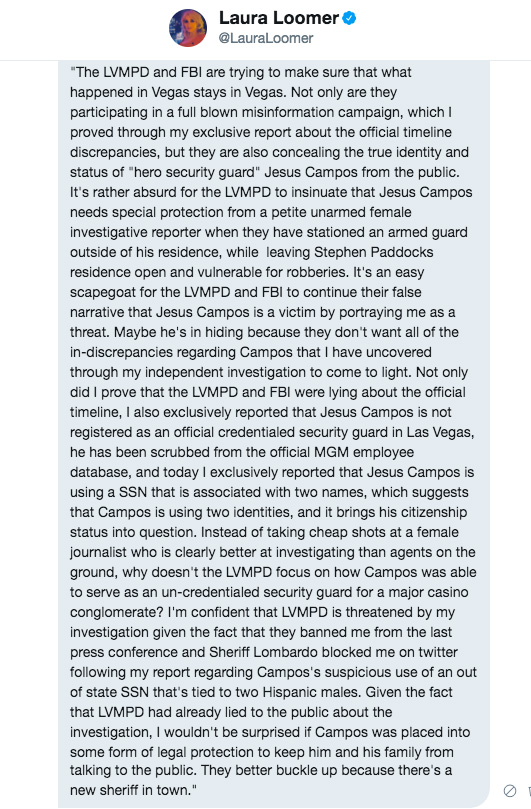