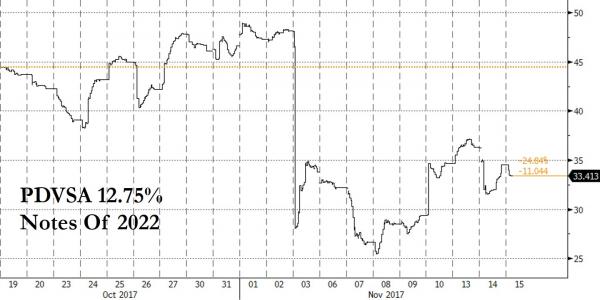 As Venezuela teeters right on the brink of complete financial collapse, Bloomberg reports that Russia has agreed to restructure roughly $3.2 billion in outstanding obligations.

While details of the restructuring agreement are scarce, both sides reported that the deal spreads payments out over 10 years with minimal cash service required over the next six years.

Russia signed an agreement to restructure $3.15 billion of debt owed by Venezuela, throwing a lifeline to a crisis-wracked ally that’s struggling to repay creditors.

The deal spreads the loan payments out over a decade, with “minimal” payments over the first six years, the Russian Finance Ministry said in a statement. The pact doesn’t cover obligations of state oil company Petroleos de Venezuela SA to its Russian counterpart Rosneft PJSC, however.

“The terms are flexible and very favorable for our country,” Wilmar Castro Soteldo, Venezuela’s economic vice president, told reporters in Moscow after the signing. “We will be able to return to the level of commercial relations with Russia that we had before,” he added, noting that a deal to buy Russian wheat will be signed next week.
This is the second time Russia has agreed to reschedule Venezuela’s debt payments after agreeing to an extension last year. Still, Caracas failed to make payments amid an economic crisis triggered by low prices for oil. Rosneft has also provided several billion dollars in advance payments for Venezuelan crude supplies.

The rescheduling pact is a “demonstration of the desire to maintain ties with the current Venezuelan leadership,” Viktor Kheifets, an expert in Venezuela at St. Petersburg State University, said by phone. “Russia isn’t happy with everything that the government there is doing but Venezuela is an ally where Russia has economic interests and Moscow is firmly against a forcible change of regime there.”

In a website statement announcing the deal, Russia’s Finance Ministry said, “The debt relief provided to the republic from the restructuring of its liabilities will allow funds to be allocated for the country’s economic development, to improve the debtor’s solvency and increase the chances of all creditors to recoup loans granted earlier to Venezuela.”

Of course, the deal with Russia comes as attempts to hold talks with Venezuela’s other creditors faltered this week. President Nicolas Maduro had summoned holders of some $60 billion of bonds issued by the government and PDVSA to begin a renegotiation as the nation’s cash crunch worsens, but as we noted previously (see: S&P Downgrades Venezuela To “Selective Default” After Bondholder Meeting Devolves Into Total Chaos), the meeting turned out to be nothing more than a photo op.

Meanwhile, as the Financial Times noted yesterday, failure of ISDA committees to determine whether or not a default event actually occurred when Venezuela blew through its grace period, has only added to the confusion of the restructuring process.

A finance industry committee convened to discuss whether Venezuela’s state oil company has defaulted on its debts has elected to delay the decision once again, underscoring the uncertainly swirling around the country’s bond payments.

Venezuela belatedly came through with a $1.1bn PDVSA bond payment last week, but only well after a three-day grace period following the bond’s maturity on Nov 3. That led to a request that the International Swaps and Derivatives Association’s “determinations committee” consider whether PDVSA was in default.

The Isda committees have the power to declare a “failure to pay”, which would trigger insurance-like contracts on PDVSA’s bonds, known as credit-default swaps, even if the actual bondholders haven’t declared it a default. But in a statement on its website on Monday, Isda said that the committee had decided to reconvene on Tuesday at 11am to discuss the PDVA question further. 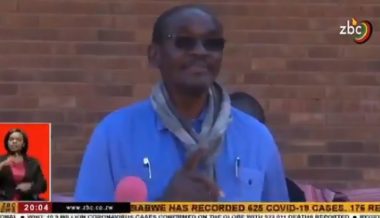