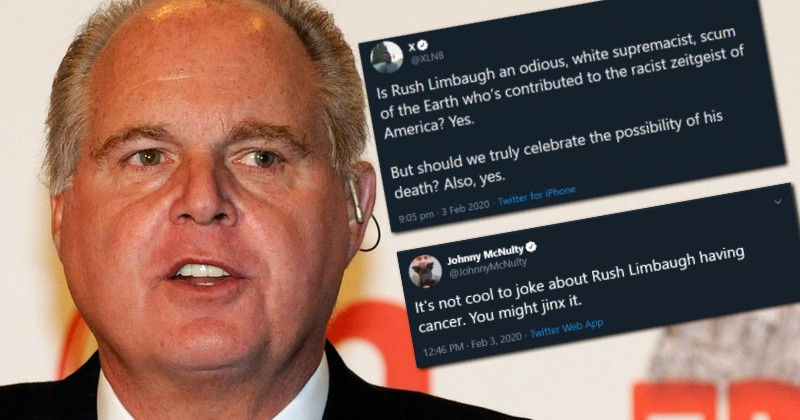 Numerous verified leftists on Twitter reacted to Rush Limbaugh’s announcement that he was suffering from “advanced lung cancer” by celebrating the news.

The veteran radio host broke the news earlier today on his show, telling his viewers, “I can’t help but feel that I’m letting everybody down with. The upshot is that I have been diagnosed with advanced lung cancer.”

“It’s not cool to joke about Rush Limbaugh having cancer. You might jinx it,” said writer Johnny McNulty.

Writer and director Xavier Burgin called Limbaugh “an odious, white supremacist, scum of the Earth” and said his cancer should be celebrated as “good news for Black History Month.”

Is Rush Limbaugh an odious, white supremacist, scum of the Earth who’s contributed to the racist zeitgeist of America? Yes.

But should we truly celebrate the possibility of his death? Also, yes.

“Seeing a lot of people celebrating the news about Rush Limbaugh. And I just want to say good. Carry on,” remarked GQ writer and Bernie Sanders supporter Freddie Campion.

Seeing a lot of people celebrating the news about Rush Limbaugh. And I just want to say good. Carry on.

NYT bestselling author Jamie Ford reacted to Limbaugh’s cancer by equating him with a fascist and commenting, “History is a harsh mistress.”

Charles Coughlin was the Rush Limbaugh of the Great Depression. 30 million tuned in as he railed against the New Deal (socialism), embraced fascism, and spewed anti-Semitic rhetoric.

Few remember him because he wasn't a builder he was a wrecker.

History is a harsh mistress.

John Tayler tweeted, “It’s only fitting that this cancer upon the world should be stricken by it.” 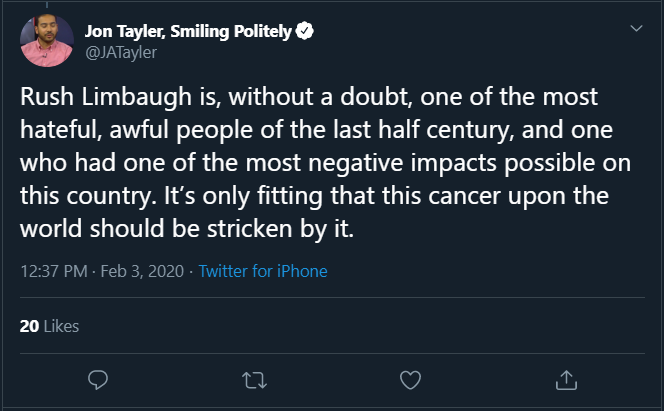 Left-wing website Raw Story taunted Limbaugh by bringing up an old show in which the radio host had said “I would like a medal for smoking.”

‘I would like a medal for smoking’: Old radio shows haunt Rush Limbaugh after he reveals advanced lung cancer https://t.co/7BZvqdRyz3

“At least one of my prayers was answered,” remarked one.

“Sometimes, every once in a while, there is a tiny bit of justice,” added another.

“May he suffer a painful humiliating death, the same way he humiliated others, Amen. Enjoy Hell Rush,” remarked another.

Counterpoint to what seems to be the prevailing opinion on Rush Limbaugh's cancer:

Also, fuck his cancer for being 40 years too late.

These are the same people who will assert the moral high ground at every available opportunity.

The audio of Rush Limbaugh announcing on his show that he has advanced lung cancer
pic.twitter.com/sq5PGhzCQO