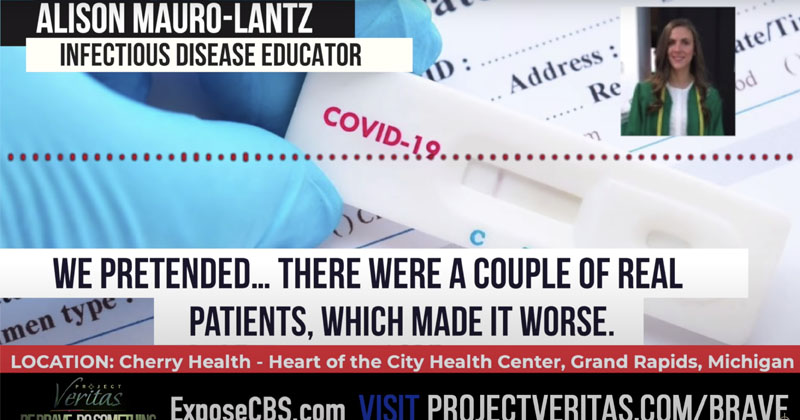 Project Veritas founder James O’Keefe asked the insider: “You’re telling me you’re a hundred percent certain that CBS News, CBS News Corporation–national, staged a fake event. They faked the news. They faked the reality and broadcasted that to all of their audience last Friday on “CBS This Morning.”

The insider caught several Grand Rapids, Michigan health center workers on undercover video candidly talking about how the CBS News crew tasked them with inflating the testing lines before they began filming.

“Apparently the news crew wanted more people in the line because they knew it was scheduled,” said Nick Ross, a corporate cleaning site supervisor at the Cherry Health facility.

A nurse caught on hidden cam admitted they weren’t administering real tests and made the line longer for CBS News crews to film.

“We pretended. There were a couple of real patients, which made it worse,” said nurse Alison Mauro.

Another nurse said she was surprised CBS News wanted to set up a fake report.

“We knew they were coming. We had no clue that we’re going to have to, like, do fake patients,” she said. “They probably just wanted to make it look busy is my guess.”

CBS has issued a statement in response to Project Veritas’ report:

CBS News did not stage anything at the Cherry Health facility. Any suggestion to the contrary is 100% false. These allegations are alarming. We reached out to Cherry Health to address them immediately. They informed us for the first time that one of their chief officers told at least one staffer to get in the testing line along with real patients. No one from CBS News had any knowledge of this before tonight. They also said that their actions did not prevent any actual patients from being tested. We take the accuracy of our reporting very seriously and we are removing the Cherry Health portion from the piece.

Alex Jones exposes the hoax that hospitals are overrun as reports claim they are emptier than they have ever been.