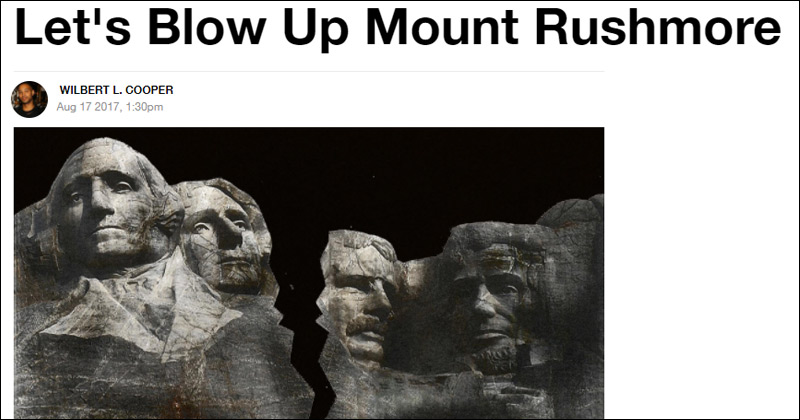 The left-leaning website Vice quickly changed a headline and deleted a related tweet Thursday after calling for Mount Rushmore to be blown up.

An article published by author Wilbert L. Cooper initially carried a headline which read, “Let’s Blow Up Mount Rushmore,” which was later changed to “Let’s Get Rid of Mount Rushmore.”

The article was also sent out on the publication’s Twitter feed, before it was quickly deleted.

They deleted it – here it is. pic.twitter.com/Cd65GassvD

As pointed out by media commentator Mark Dice, the original headline title still appears in the article’s URL, or web address.

Attent @FBI @DHSgov — Vice News is calling for bombing Mount Rushmore. Then changed title. Original title is in the URL of the article.

In the article, Cooper wishfully ponders, “If Rushmore ever did get ‘blown up,’ what should those dudes be replaced with?” after citing a Daily Caller piece in which the author facetiously argued that leftists should be outraged over the South Dakotan landmark.

Cooper says he’d be “onboard” with a “serious push to blow up Rushmore and other monuments like it,” and says it’s “important business for this country” to “demystify the historical figures of the past.”

Despite amending the article with an editor’s note claiming “the use of ‘blow up’ in the original headline” was a rhetorical device, multiple Twitter users took Vice to task.

This is what @VICE is pushing for (link for bombing), a call to violence no matter what or how it's donehttps://t.co/Cxka72g8bw

In an attempt to validate Trump's talking points, the Leftists at VICE advocate blowing up Mt. Rushmore.https://t.co/C4BdiUX4OV

Vice pulled a piece on why we should destroy Mount Rushmore.

That they even felt comfortable publishing it says something about the left. https://t.co/4MyDpVItVG

Wake up America! Vice is calling for stirring up terror and demolition for our monuments. https://t.co/kXYEkWoBOR

VICE said "let's blow up Mount Rushmore". So very ISIS of them, it seems a common trait among the alt-left.

The alarming headline comes in the wake of President Trump’s Tuesday press conference in which he condemned both sides for the weekend violence in Charlottesville, addressed the removal of statues across the nation and also questioned if presidents George Washington, or Thomas Jefferson would be next targeted.

Update: An image of Vice’s previous headline still appeared on author Wilbert L. Cooper’s Instagram page as of 5:30PM Central – even after Vice deleted their tweet, updated their headline AND altered the story’s URL. 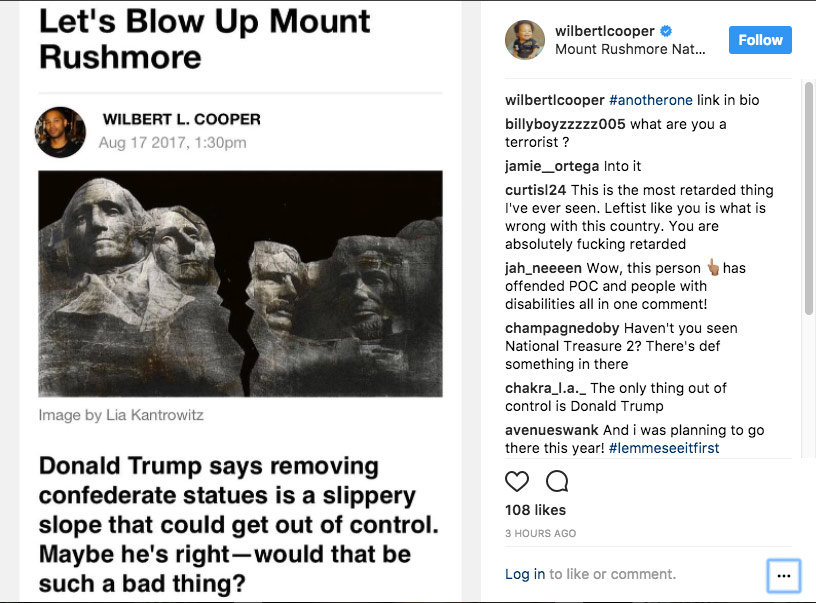