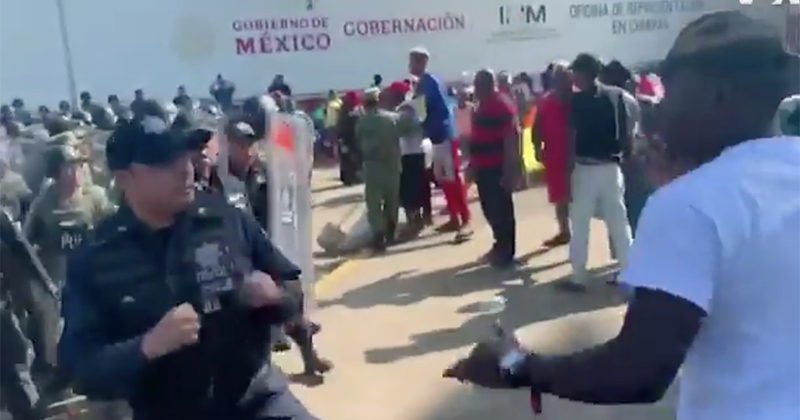 Thousands of Africans detained near Mexico’s border with Guatemala are growing restless and are now attacking police in hopes of convincing authorities to allow them to continue their quest for the U.S.

Videos posted to Twitter and YouTube show migrants from the Congo, Cameroon, Haiti and other countries hurling garbage cans at federal police and military in Tapachula, Mexico, where dozens of officers used crowd control shields to contain the mob last week.

African migrants and refugees are protesting at Mexico's southern border. They're demanding safe passage to the U.S. pic.twitter.com/i3weGSqRI2

In one clip, about a dozen Africans yelled at a gate: “Nicaragua! Pass! Honduras! Pass! Guatemala! Pass! Mexico! No! Mexico! No!” The group also danced and chanted with their children while banging drums.

In another clip, one of the migrant men pleaded his case.

The “news” site AJ+ reports Mexican authorities registered at least 1,900 African migrants in the first four months of 2019, though it’s unclear how many have followed the route through south and central America since.

Migrants at the Tapachula detention facility toted signs in Spanish and threw bottles and other garbage at officers sent in to control the melee, injuring at least one federal police officer in the process.

The crowd booed and mocked police as officers loaded their injured colleague into an ambulance, while migrants were also apparently injured in the scuffles.

8/27/19 Mexican Police Clash With Migrants From Africa and Haiti Outside Immigration Center after migrants demand passage through Mexico to the United States. #MexicoIsTheWall pic.twitter.com/g9wDM0O3uV

Footage posted to Twitter shows military police forming a human barricade with clear shields in an apparent attempt to corral the protestors.

Additional video from Ruptly shows the soldiers pinning the crowd up against a large bus as several blew whistles and others recorded the conflict with cell phones.

Nationals of the Democratic Republic of Congo, Somalia, Angola, Senegal, Cameroon, and several other African countries, stuck in southern Mexico after the government clamped down on northward migration in response to US pressure, are protesting for the right to continue their journey.

They are demanding travel documents and government support, so that they can enter the US.

The fallout stems from President Trump threatening tariffs on Mexico to convince authorities there to enforce immigration laws to help stem the tide of Central Americans and Africans traveling through the country to enter the U.S. illegally.

U.S. Customs and Border Protection earlier this summer reported thousands of African migrants flooding across the Rio Grande River and into the U.S., often in groups of 100 or more at a time.

In many cases, the Africans came as “family units” with luggage and children in tow, until Mexican authorities intervened to slow the illegal migration.

Many of the African migrants to made it across were processed by Border Patrol before agents transported them to San Antonio, where many took buses north to Portland, Maine, home to the most generous municipal charity in the country.

Hundreds are now sleeping in shelters and basketball stadiums in that city, relying on the local government for their basic needs until they qualify for state and or federal benefits.