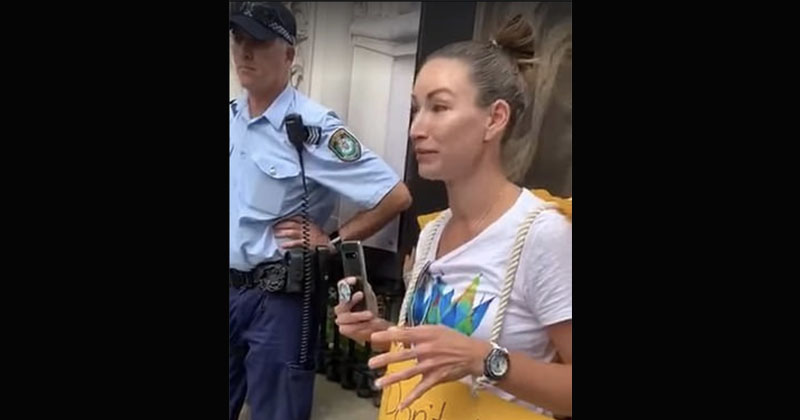 A mother exercising her legal right to protest social distancing and forced lockdowns in Sydney Australia was detained by police while her terrified son was ripped from her arms.

In Australia, social distancing policies still allow outdoor exercise as long as the people maintain a 6 foot distance apart. Other people could be found from 2pm until 4pm walking on Macquarie Street to ‘exercise’ their rights during COVID-19 lockdowns.

According to a statement provided to the Daily Mail Australia, “officers moved the group on after explaining they were not authorised to protest and were also not complying with social distancing regulations. One woman refused to give officers her details and would not comply with their direction to move on.”

According to the Sydney Police, they were responding to an unapproved protest, while there are those that maintain that these people were simply exercising outdoors while wearing signs.

The police themselves can be seen in the footage with no masks, definitely not adhering to the mandatory 6 foot distance policy, however they maintain the arrest of the mother was due to her lack of compliance when asked to leave the public area she occupied with her son.

During the confrontation with Police officers, the mother can be heard saying, “I don’t know how you guys are going home in honor tonight and trying to infringe me with a notice which I don’t consent to because we’re doing nothing wrong. You guys should be here holding the signs with us, defending us. I don’t consent to what you’re doing.”

The women resists as the officers force her child away from her. The child can be heard screaming, “mummy is not going,” and, “leave mummy alone.”

When the mother is put in the police car, an officer can be seen restraining her son as he thrashes and shrieks for his mother. She was then taken to Surry Hills Police Station.

Dr. Jeffrey Barke has come out to stand against the hoax COVID-19 numbers used to lock down society.