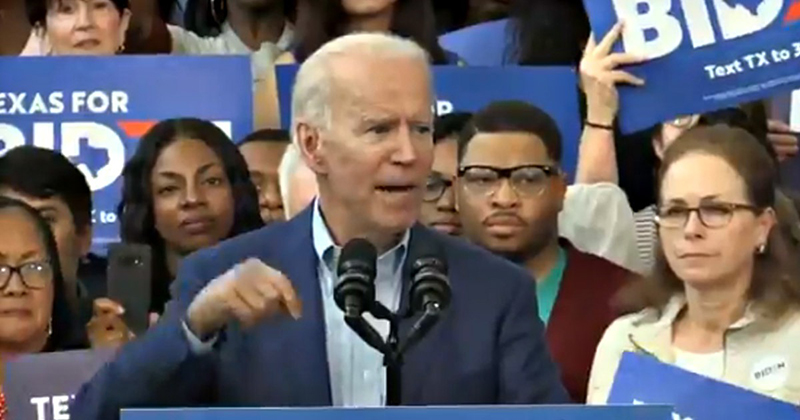 As other center leaning Democrats begin to exit the race and endorse former vice president Joe Biden, all eyes are directed toward the candidate. Unfortunately, this means many eyes caught the candidate referring to God as “the thing.”

In a rally held on Monday afternoon, Biden stammered and appeared to lose his train of thought while attempting to quote the Declaration of Independence.

“We hold these truths to be self evident,” Biden started strongly, “All men and women created by the, go, you know, you know the thing.”

What Biden apparently meant to quote was, “We hold these truths to be self-evident, that all men are created equal, that they are endowed by their Creator with certain unalienable Rights, that among these are Life, Liberty and the pursuit of Happiness.”

“All tests are free,” said Biden. “Free, free free, all vaccines will be free!”

Biden has been haunted by gaffes since starting his campaign. Perhaps the most high profile recent gaffe showed the candidate erupt at a reporter, screaming into the man’s face, “Why why why why why why why” after asking why Biden criticized Sanders.

WATCH: After a campaign event in Mason City, Iowa, @joebiden reacts to @edokeefe's question about his ongoing feud with @berniesanders: "Calm down, it's okay." https://t.co/a2hmMbnjnf pic.twitter.com/ymOMWRR2zP

After his many why’s, Biden said “You’re getting nervous man,” and awkwardly gave the man a soft punch to the chest.

Earlier this year, Biden stopped answering questions from both reporters and citizens, potentially in a move to temporarily stop the frequent gaffes.

Democrat presidential candidate Joe Biden was confronted for dodging questions in the state of New Hampshire. Biden did not take any questions from either the press or the voters during his two-day trip to the Granite State that wrapped up this weekend.

With his role in son Hunter’s Burisma Holdings scandal taking center stage as President Donald Trump’s legal team takes over opening arguments in Trump’s impeachment trial, Biden is clearly looking for the path of least resistance to make it through the early primaries as he competes with Bernie Sanders.

Support from the moderate wing of the Democrat Party appears to be consolidating around Biden as the party braces for Super Tuesday, where one third of all delegates will be decided.