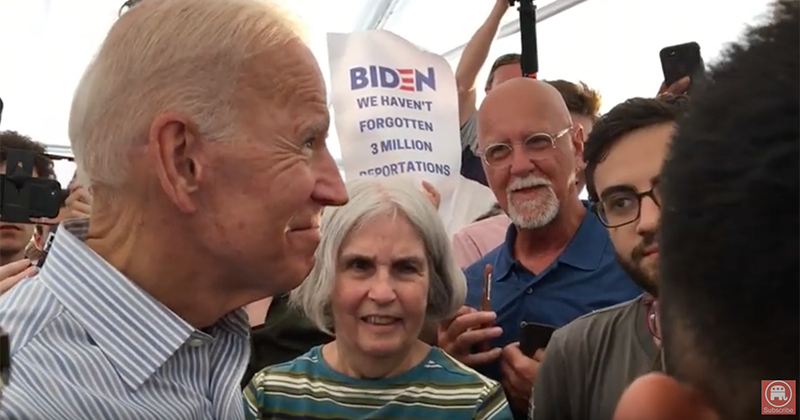 Bill Clinton was dogged in 2016 by black protesters opposed to the 1994 crime bill, and now Joe Biden is having to answer for his former boss’s policies.

Biden was holding a campaign event in Dover, New Hampshire when he got ambushed by over a dozen open borders protesters.

One — who spoke through an interpreter — demanded an apology for the “3 million deportations” that occurred during the Obama-Biden administration, and wanted a commitment that deportations would stop during a Biden presidency.

“Two months ago in May, I was detained and put in deportation proceedings,” the man said through an interpreter.

“I want you to apologize to the 3 million immigrants who were deported and separated for their families under the Obama years.”

“I want to know if you will commit to stopping all deportations if you are elected president,” the man said.

“No,” Biden said flatly. “Not all deportations.”

He then refused to apologize for Obama deportations.

Biden smirked again at their antics.

“Oh yes, no you don’t really, but the fact of the matter is a deportation for a serious felony is a deportation,” Biden said, adding he would not deport for misdemeanors.

“Under my administration there will be no family separations until there is a hearing, whether asylum is, in fact, warranted,” he said.

“I will not apologize for deportations of people who have committed a felony,” he said.

He then attempted to leave the scene, saying he would talk to the protesters “separately.”

Today we confronted Joe Biden about his shameful immigration record. We need a democratic nominee who can win support from the millions of people who are outraged over ICE’s imprisonment, deportation, and separation of immigrants and immigrant families. pic.twitter.com/nY6iw7M5Zp

“Today we confronted Joe Biden about his shameful immigration record,” it wrote.

“We need a democratic nominee who can win support from the millions of people who are outraged over ICE’s imprisonment, deportation, and separation of immigrants and immigrant families.