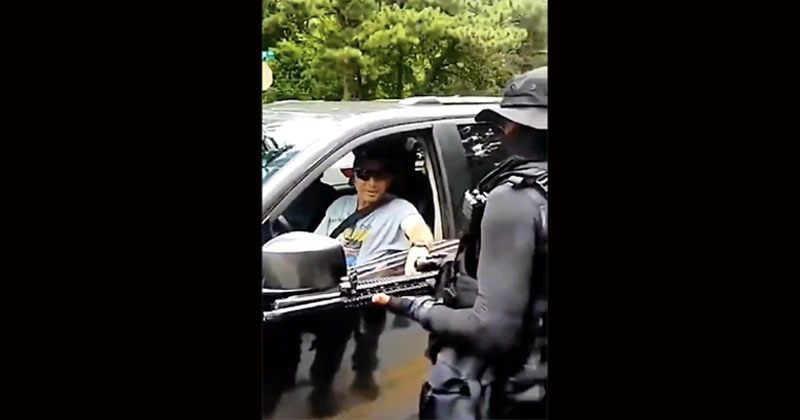 The group, known as the Not Fucking Around Coalition (NFAC), marched up and down a road at Stone Mountain Park near Atlanta clad in black fatigues, armed with military-style rifles, and yelling, “Black Power.”

In one video, a black militia member is seen approaching a white man in his vehicle and demanding reparations while holding his rifle menacingly.

“I’m your worst nightmare, bruh,” he tells the driver. “We ain’t Black Lives Matter, we ain’t none of that bullshit.”

The driver didn’t appear intimidated, and asked, “Who are you?”

“You steal a people’s culture then dare to have an attitude about it,” he says. “Where’s our reparations?”

The driver, amused by the LARP, asks the militia member, “What did I ever do to you?”

“It’s not what you did, it’s what your ancestors did,” the militia member replies.

The driver dismisses the black militia member with a wave and says “I ain’t getting into this with ya’ll.”

The militia member then walked away.

Can I ask a question? Please no one attack me. But, if we can say Black Power how come they can’t say White Power? I’m just asking 😩 pic.twitter.com/cu91P3wabl

The militia was clearly ready to instigate confrontations with “white militias”, but they appeared disappointed when they didn’t find such groups around the park.

“We here! Where the fuck you at? We in your house!” a militia member shouts through a bullhorn.

The Not Fucking Around Coalition (NFAC) militia in Stone Mountain, Georgia called out all rednecks and white supremacist militias “We here, where the fuck you at?”. (📹@VlanciPictures) #BlackLivesMatter pic.twitter.com/B76Ab6WUSF

Such a demonstration was clearly meant to further divide the American people by race, as the establishment wants, but luckily the other militia and Second Amendment groups didn’t take the obvious bait.