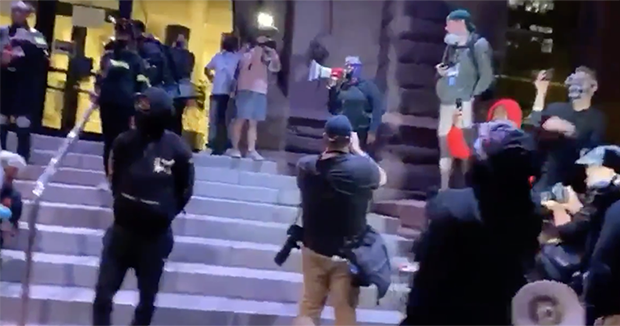 Black Lives Matter organisers have taken to using white people marching with them as human shields to separate themselves from police.

Video out of Rochester, New York, shows organisers demanding that white people form a front line between black protesters and the police.

“If you’re white and you got a shield, you need to be making a perimeter from whatever this street is to whatever that street is. If you are black, stay in the middle,” an organiser with a megaphone is heard ordering in the footage.

White bodies to the front! (See it a lot) The only good ally is a battered ally!

It's actually written into their game plan for Whites to be cannon fodder.

What if you’re mixed? Do you get to pick where you go?

The tactics have also been witnessed in Portland, among other places:

The shield line moving forward towards the police, prompting them to declare a riot minutes later #Portland #PortlandProtests pic.twitter.com/xk0PrFvUaH

The idea is that police are less likely to respond with force against white people, and if they do… well, whitey takes the beating so it’s ok.

Rochester was the site of more rioting this past weekend:

#HappeningNow the protesters in Rochester NY are "shutting down restaurants", tables are broken, people running off scared #rochesterprotests pic.twitter.com/oxmlZp526w

further footage revealed one agitator declaring that the violence should be directed more “toward the white folks”: