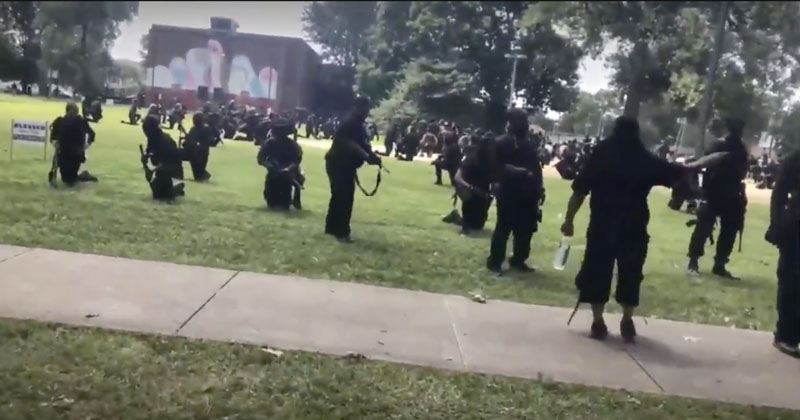 Several members of a heavily-armed black militia group were injured after one of its members accidentally fired several shots during their Black Lives Matter protest in Louisville, Kentucky, on Saturday.

The self-described “Not Fucking Around Coalition” (NFAC) had planned a rally at Baxter Square Park to protest the death of Breonna Taylor by Louisville police.

At the BLM #NFAC rally in Louisville one of the members accidentally shot themselves or another person. Hearing reports of possibly two injured. Seeing a lot of irresponsible things, people pointing weapons at each other 🤦‍♀️ pic.twitter.com/Q7b3rcaC7R

Protesters scattered following the gunshots, with some hiding behind cars while others fled the area.

But many of the militia members just took a knee while police moved in to help the wounded.

One of the members of the NFAC told fellow protesters, “we had a little accident, it happens,” according to Fox News.

All of the victims were transported to the University of Louisville Hospital with non-life-threatening injuries, according to the Louisville Metro Police Department.

Two people were carried out on stretchers.. Surprisingly, nobody had anything bad to say to the police when they were helping the victims. pic.twitter.com/mmNbmXUjqe

The NFAC is the same radical group who marched on Stone Mountain Park in Georgia earlier this month to protest the Confederate Memorial Carving, shaking down white drivers at gunpoint for reparations as they did so.