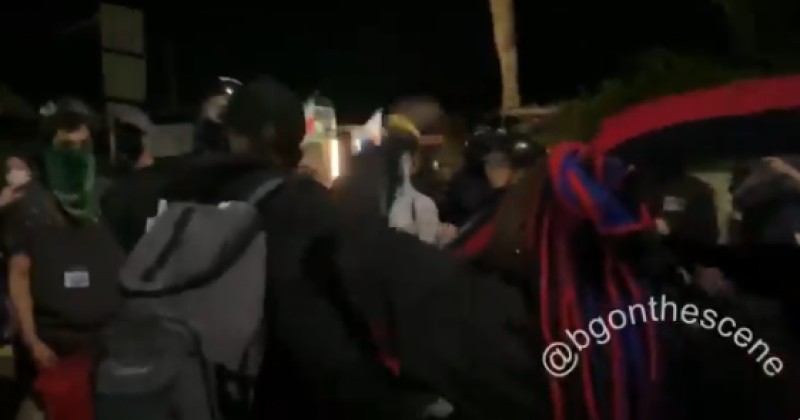 A video out of Portland shows a black woman involved in a confrontation with Antifa rioters who she accuses of calling her racial slurs as they temporarily block her vehicle.

The clip begins with the African-American woman telling the white Antifa rioters to get out of the way as they claim they are engaged in a “non-violent protest.”

“You setting fires in the street, no that’s violence,” responds the woman.

The rioters position themselves in front of her car as she tells them to go and “tear up” another neighborhood.

“You’re setting fires in the streets?” asks a black female driver tonight who is stopped by antifa rioters in north Portland. “Get out of my way!” She refuses to follow their orders. Video by @BGOnTheScene. #PortlandRiots pic.twitter.com/pd3cSN0Ikx

The Antifa rioters deny being responsible for the racist slur before accusing the woman of pushing them with her car.

“If I was pushing you with my car, you’d be laying the fuck over,” responds the woman as the confrontation becomes more heated.

The rioters are finally forced to let the woman pass. One suspects that if she was white, they would have physically attacked her.

“What’s it called when a bunch of masked white people with a history of violence looting and burning black communities block a black woman from driving while calling her racial slurs?” asked journalist Tim Pool.

The video emerged after yet another weekend of terrible optics for Antifa and BLM which included them once again aggressively confronting diners outside restaurants in Rochester and Pittsburgh.