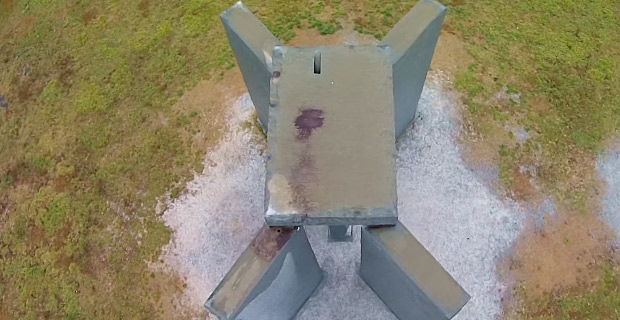 Drone footage appears to show bloodstains on the uppermost slab of the iconic Georgia Guidestones, the monumental landmark studied by conspiracy theorists and curious persons alike.

“I was flying my quadcopter above Georgia Guidestones and found these crazy stains that look like blood,” a man from the website Phenomenal Place.com describes. “Very intriguing to watch because you don’t see any stains from the ground at all.”

Some of the blood appears to have dripped onto supporting columns.

“These stones look completely normal from the ground level but from the top you can see a big splash of this,” the man says. “I don’t know what you can make of it, but it does look like blood.”

The most startling inscription appearing on the monuments states, “Maintain humanity under 500,000,000 in perpetual balance with nature,” which some believe to be a proclamation of the underlying New World Order mass eugenics, depopulation agenda.

“Of course, if the population were reduced by this number a genocidal extermination of the huge majority of the world’s population of 6.5 billion would have to ensue,” writes author and occult researcher Texe Marrs in the book Mysterious Monuments. “That would entail a significant bloodletting.”

“Made of granite, the Guidestones have a central stone oriented astrologically to the sun, aligned with the rising and setting of the fiery orb in its cycle of 186 years (translated numerologically as 666-6),” Marrs writes.

Last year, the stones also mysteriously received a block inscribed with the numbers 20 and 14, which was later removed and smashed on the ground.

The man behind the video questions whether the “blood” may have been thrown there by vandals.

“Could this be some kind of vandalism? Did somebody just throw a cup of say, chicken blood from the ground?” he asks. “It is kind of impossible to do that because the stones are 20 feet tall.”

Perhaps someone brought a ladder, he also theorizes.

“If this is a case of vandalism, you would need a ladder to go up top and throw some blood, but you cannot do that because you are being watched by police 24/7,” he says, pointing out that a surveillance camera constantly watches the area.

Security cameras were added to the installation following a series of vandalistic acts. 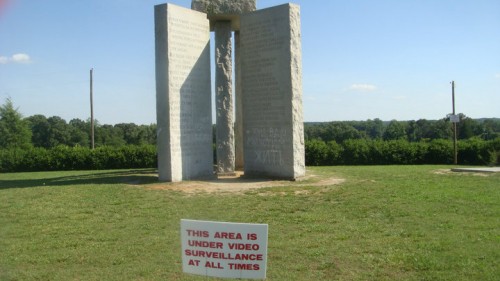 The man infers that if some form of blood sacrifice ritual took place it must have happened recently because the blood would have been washed away by recent rains.

Commenters have suggested the stain could be anything from a bird of prey’s leftovers, to bird droppings to red paint.