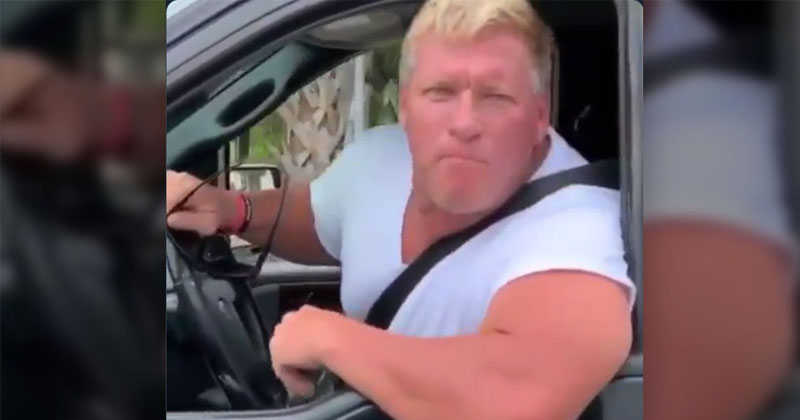 Video footage that went viral on social media shows a blonde bodybuilder who bears a striking resemblance to the eponymous “Chad” from the “Virgin vs. Chad” meme confronting a motorist over left-wing signage on the latter’s vehicle, and stating, “Trump will win, and we’re going to bring it back motherf*cker!”

“You traitor loser f*cking piece of sh*t,” the bodybuilding motorist says, appearing totally nonplussed by the camera phone trained on him that has become the default weapon of choice during everyday heated political encounters.

Remember, these types of folks will be voting. #WeMust864511320 pic.twitter.com/4tM3TuBQVD

“Yeah, videotape me all day long,” the “Chad” driver says, revving his engine. Trump will win, and we’re going to bring it back, motherf*cker.”

“F*ck you! F*ck you, you f*cking no-brain p*ssy. F*ck you!” the muscular Trump supporter adds before speeding off.

An unknown flag that appears to be BLM or Antifa related can be seen attached to the vehicle of the person filming in the rearview mirror, while “BLACK LIVES MATTER” is scrawled on the passenger door.

The footage was originally posted by a left-wing Twitter account that has been posting content supportive of Black Lives Matter since 2015, in an attempt to publicly shame the Trump supporter in the video. Left-wing Twitter activists were quick to demand the man’s license plate and personal information so he could be doxxed and shamed, as is routine on Twitter.

The video soon went viral on other accounts however, with right-wing twitter users expressing admiration for the buff Trump supporter, who was dubbed a “Chad” for his resemblance to one of the title characters in the “Virgin vs. Chad” meme template, as well as video game protagonist Duke Nukem.

In a similar encounter caught on video in June, a Black Lives Matter activist in the small town of Bethel, Ohio was told, “Get this on your phone. This ain’t Seattle, this isn’t a Democratic state here, we don’t put up with your sh*t. All lives matter here.”

Alex Jones breaks down the authoritarian plan to implement medical tyranny and force the public to submit.