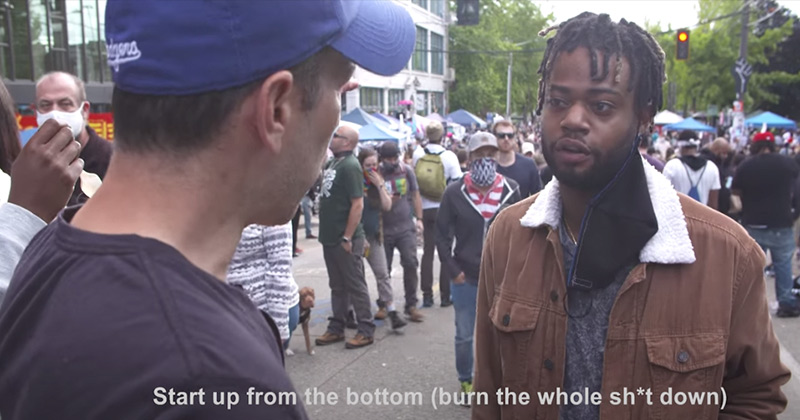 Documentary filmmaker and political activist Ami Horowitz went into the newly created area of “CHAZ” in downtown Seattle, Washington to find out what the demonstrators actually want.

Essentially the protesters admit their agenda is to “burn down” American society as we know it.

From totally abolishing all police departments to destroying capitalism, the movement believes they “cannot rebuild until they break it all the way down.”

One of the group’s leaders, Jaiden Grayson, explained that black Americans have severe PTSD from seeing their peers being killed by police and claimed it is much worse than the pain caused by the 9/11 terror attacks.

“You have people still bitching about 9/11. Unbelievable! One act of terror,” she condescendingly declared.

Ironically, one of the only people Horowitz interviewed who disagreed with the current protest’s violent and destructive tactics was a member of the original Black Panther Party.

Explaining that a lot of people near the “autonomous zone” need police assistance, the man compared the current situation to the Black Panther movement of the 60s, saying, “we did not go around and smash ’em and burn ’em out and things like that, it just didn’t happen.”

Continuing, he said, “Shutting down the streets and calling this some kind of ‘autonomous zone’ is a bunch of bullshit.”

A man wearing a MAGA hat carrying an American flag took the brave decision to walk through Seattle’s ‘Capitol Hill Autonomous Zone’, which is being occupied by left-wing radicals.