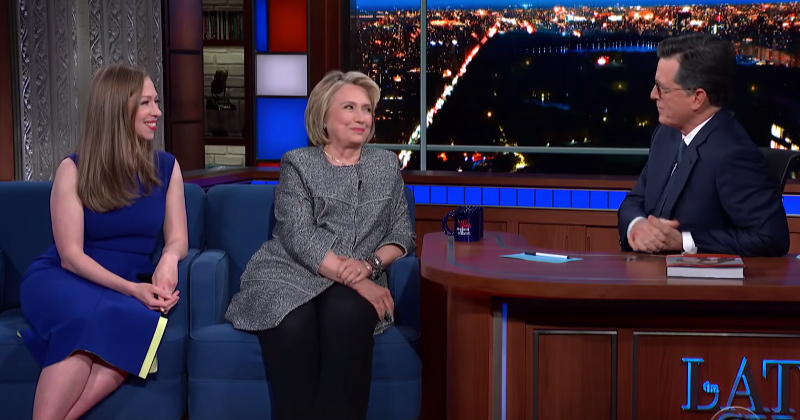 A late night audience chanted, “Lock him up” in reference to President Donald Trump when failed presidential candidate Hillary Clinton appeared as a guest on CBS’ “Late Show.”

Invoking the infamous anti-Clinton chant popularized by Trump rally crowds, Colbert asked Hillary on Monday if Trump’s Ukraine phone call, largely dismissed as a “nothing burger” but still used as the pretext to launch an impeachment inquiry, now warranted “Lock him up” chants.

Stephen Colbert starts a “lock him up” chant at the start of his interview w/ Hillary & Chelsea Clinton pic.twitter.com/HQZHKCORWg

“We learned about the Trump-Ukraine call, the private server – is it time to, dare I say, ‘Lock him up?'” Colbert asks the potential 2020 candidate, who cackles uncontrollably.

The audience dutifully takes their cue, and begins chanting, “Lock him up! Lock him up!”

Given the audience’s giddy reaction, it’s evident Trump supporters’ “Lock her up” chants have been effective at getting under the skin of Democrats, who are still suffering from Trump Derangement Syndrome three years after the election.

On the bright side, it’s nice to see liberals are coming around on free speech after CNN attempted to call the “Lock her up” chants hate speech earlier this year: