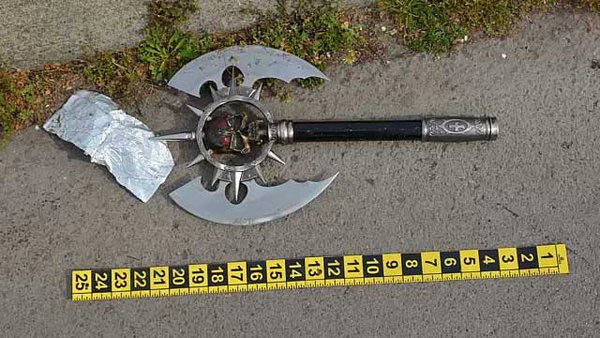 Startling footage has emerged of a Tennessee police officer gunning down a black woman who was advancing toward him wielding a replica medieval battle-ax.


The lapel cam video begins with Gallatin Officer James Spray arriving at the scene of an altercation Wednesday responding to reports that a Sumner County Sheriff had been injured by a woman with an ax.

Upon exiting his patrol vehicle, the woman, LaRonda Sweatt, 40, menacingly approaches the officer, at which point he trains his weapon on her and demands she get on the ground, which she does not.

Officer Spray proceeds to fire two shots at Sweatt before she falls and drops the axe.

Sweatt later died at the hospital.

Before the shooting incident, Sweatt had used the ax to attack Sumner County Sheriff’s Deputy Gary Pickard when he arrived at her home to serve an eviction notice.

Sheriff’s deputy Pickard was also transported to the hospital, but he’s already been released.

“Laronda was a very sweet, caring person until you pushed her,” Laronda’s mother, Ella, told WKRN. “Laronda wasn’t violent unless you made her violent. She was a good mother, she took good care of her child. Her and I had our ups and downs, but she was my only child out of five, and I love Laronda dearly.”

A cousin of Laronda told the Tennessean the woman had mental health issues.

“She was a good person. It could have been avoided, him killing her and shooting her in the chest like that,” he stated.

Officer Spray has been placed on administrative leave while the Tennessee Bureau of Investigation looks into the case.