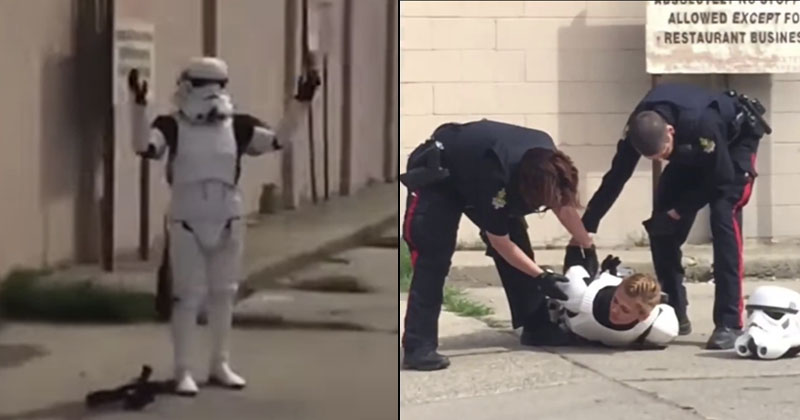 Video out of Canada shows a woman in a Star Wars Stormtrooper costume arrested for brandishing a rifle that turned out to be a plastic toy blaster.

Footage shows Lethbridge, Alberta police tackling and arresting a bar employee outside the Coco Vanilla Galactic Cantina dressed up as a Stormtrooper for “Star Wars Day” on Monday.

The video begins with the bar employee and cameraman joking around about doing typical Stormtrooper poses and moves.

But moments later Lethbridge PD surrounded the Stormtrooper with guns drawn, demanding she drop her weapon and “get down on the ground,” which she did.

The clip then shows her being shoved to the ground and handcuffed with several police vehicles nearby.

A nearby Coco Vanilla employee is seen shouting at the police: “Are you serious?”

The woman reportedly claimed the police were too rough with her, especially given she committed no crime.

“The woman claims cops roughed her up as they put cuffs on her, allegedly shoving her face into the ground and making her nose bleed. Once all the commotion settled down, the cops eventually realized there was no threat — and cut the gal loose without charging her,” TMZ reported.

“She and her co-workers are pissed — but cops say they were just responding to reports of someone with a firearm and were only doing their jobs.”