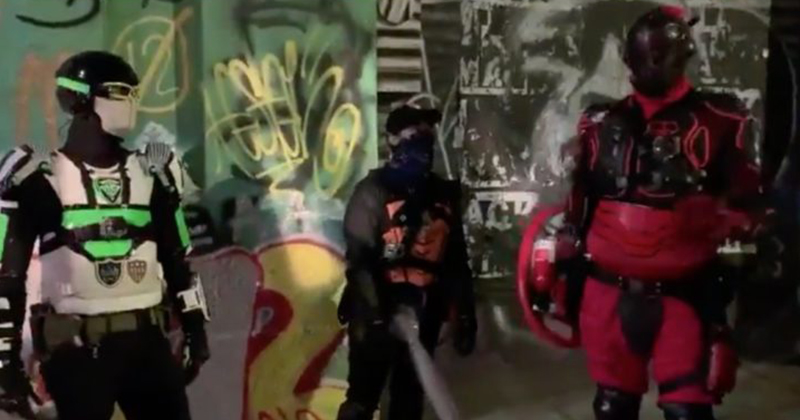 A team of vigilantes, who identify both as the ‘Seattle Superheroes’ and as non-binary, has emerged in the Capitol Hill Autonomous Zone in riot-ravaged Seattle, WA.

Governed by nothing but a bizarre ‘Conflict Reduction Advisory Council’ and a rogue warlord, the CHAZ has quickly descended into chaos. At night, the Zone is plagued by addiction, crime and violence.

The NOQ Report summarized reporting by conservative journalist Jack Posobiec on the rapidly deteriorating situation within the CHAZ:

According to mainstream media, The CHAZ is more like a version of Coachella with live music and street art, a truly festive atmosphere. As Posobiec reported, this is mostly true… during the day when mainstream media’s cameras are rolling. At night, it’s completely different story. But at night, the narrative is difficult to capture because anyone with a camera out is instantly mobbed by people asking questions and attempting to block off filming. Like Democrats and mainstream media, many living in The CHAZ do not want the truth getting out.

Horrible situations were revealed throughout the journalists’ final night in Seattle. A break in and attempted arson of a local business owner. An accused thief attacked and searched before being further assaulted. Rampant drug use. Unspeakable sanitation issues. “Medics” who shield assaults rather than treat the assaulted. These are just some of the things revealed by Posobiec in his flurry of videos posted to Twitter and live-streamed from Periscope.

In the Communist utopia of CHAZ, things are going entirely as expected!

Given the CHAZ’s ban on police, law enforcement appears to have taken a particularly peculiar form within the Zone.

Three individuals in brightly colored costumes emerged on Sunday night, identifying as the ‘Seattle Superheroes’. The vigilantes introduced themselves to reporters as ‘Red Ranger’, ‘Spirit Fox’ and ‘Justin Service’.

they were genuinely patroling the streets to keep the community safe

In the daytime Antifa (US domestic terrorists) do most of the policing pic.twitter.com/VeAVQ2SRnC

“We patrol around, keep people safe, that kind of thing,” Red Ranger told a reporter.

Two of the vigilantes, Red Ranger and Spirit Fox, previously gave an interview in 2018 during the far-left May Day demonstrations, along with a fourth vigilante, El Caballero.

“Usually we do a safety patrol nocturnally,” Red Ranger stated then.

The rise of these untrained masked vigilantes as a replacement for law enforcement further highlights the need for a restoration of law and order in Antifa-occupied Seattle.