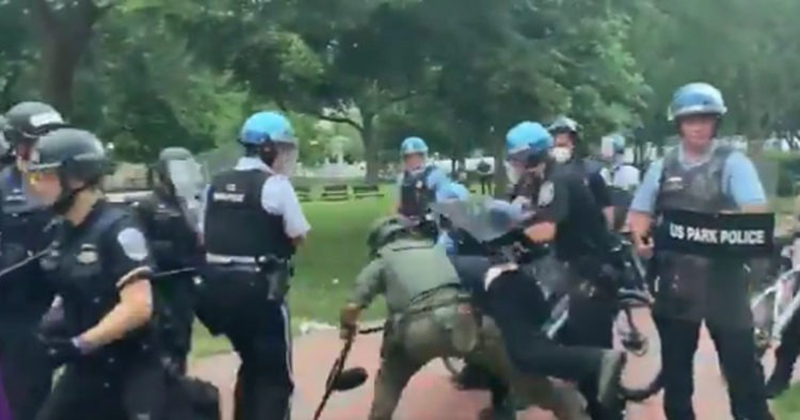 Throughout the country, statues and historical monuments have been toppled and destroyed by political vandals with no resistance from police.

A man in New Mexico shot a vandal who attacked him with a skateboard after police seemed reluctant to defend a local statue of a Spanish conquistador.

In the district of Columbia, vandals seemed to expect a similar lack of response from law enforcement when they converged in a mob on the 168-year-old statue of Jackson in Lafayette Park.

The crowd spray painted “KILLER” on the base of the statue, then attached ropes to and seemed on the verge of toppling it, before police arrived on the scene.

#BREAKING: Protesters have opened the fence surrounding the Andrew Jackson statue in Lafayette Square and have climbed on top.

I’ve heard them say they’re trying to tear it down. @wusa9 #BlackLivesMatter pic.twitter.com/i8cBlM171b

A contingent of riot police repelled the rioters and cleared out the area surrounding the park, weathering verbal taunts and abuse from the crowd.

The ropes fastened around the likeness of the United States’ seventh President, and several rioters were arrested.

It’s about time DC police showed up to stop the mob. If Muriel Bowser won’t allow the police to do their job, @realDonaldTrump should deploy federal law enforcement to protect this 168-year-old statue and every other landmark in our nation’s capital. https://t.co/J6RUDTEbYh

Good to see federal US Park Police involved and arresting these criminals. Keep up the pressure, @realDonaldTrump! #LawAndOrder! https://t.co/jAI7wNzkIz

Several BLM-affiliated groups also tried to set up an illegal “Black House Autonomous Zone” outside the White House and the area surrounding the Jackson statues. These efforts also appear to have been thwarted by police.

Another famous U.S. President, Teddy “Bull Moose” Roosevelt, has come under fire from BLM, with the American Museum of Natural History caving to pressure to remove a statue of Roosevelt for unspecified accusations of racism.

Fox News host Tucker Carlson weighed in on the efforts to remove the Roosevelt statue on Monday night’s edition of “Tucker Carlson Tonight,” stating, “Teddy Roosevelt was a hero to millions of Americans, he still is. That’s precisely why they’re tearing down his statue. They know that if they can force you to watch as they topple your heroes, they have won. There is nothing they can’t do next.”

"Teddy Roosevelt was a hero to millions of Americans, he still is. That's precisely why they're tearing down his statue. They know that if they can force you to watch as they topple your heroes, they have won. There is nothing they can't do next." pic.twitter.com/JZKK2JzWIx

Nassau County in New York took a firm stand after the American Museum of Natural History’s announcement Monday, stating that Nassau County’s own statue of Roosevelt “will stay right where it stands.”