An officer with the Dallas Police Department is facing major criticism after a home surveillance camera captured him opening fire on a mentally ill man without any provocation.

To make matters worse, police may have lied in their report about what actually took place.

After an argument with his mother, Bobby Gerald Bennett, 52, who suffers from paranoid schizophrenia and bipolar disorder, went out into the middle of the street and began rolling around in a swivel office chair.

Their neighbor, Maurice Bunch, reportedly told Bennett’s mother, Joyce Jackson, not to call the police, but Jackson had already made the call.

“They said they would send special-trained officers out,” Jackson said, according to a Dallas Morning News report.

The entire affair was captured on a surveillance camera mounted outside of Bunch’s front door. Along with Bunch’s statements, the footage seems to directly contradict the officers’ version of events.

“What’s going on?” officers asked Bennett, according to Bunch. “They were coming at him and he just scooted his chair back. He stood up. At that point, they drew their weapons and said, ‘Freeze.’ They may have said ‘Drop the knife.’”

Within 30 seconds of arriving, Officer Cardan Spencer fired four shots at Bennett, who is witnessed getting out of the chair and standing perfectly still.

An arrest affidavit listed Officer Spencer as the victim and claimed he and his partner were responding to a “disturbance call about a man carrying a knife…” It also says Bennett allegedly told them, “You all are gonna need more officers out here,” and claims he took “several steps toward them with the knife raised in an aggressive manner.” 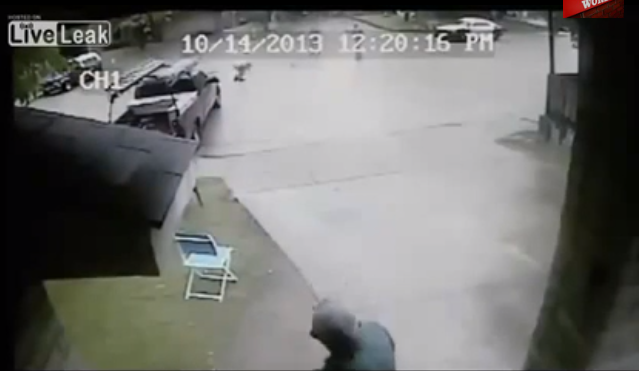 However, Bunch says she never heard them say anything to that effect and never saw a knife. “That’s a lie,” he said. “They were trying to kill him.”

The affidavit made sure to mention that Spencer fired in fear for his and his partner’s safety.

Additionally, the officer’s stray bullets entered a neighbor’s home near the altercation. “Had someone been in that home, they could have been shot as well or maybe killed,” Jackson claimed.

Afterwards, Jackson was unable to see her son in the hospital. “They said, ‘You don’t need to be here. You son is under arrest for trying to hurt police officers,’” Jackson said, according to Dallas News. “I said, ‘What would you do if it was your son?’” She was eventually permitted to peek through the window and ensure her son was still alive.

Robert Rogers, Spencer’s attorney, says the officer had a good reason to shoot Bennett. “The facts and circumstances known to Officer Spencer at the time completely justify his actions,” he said, adding, “Obviously there is much more to this situation than that video.”

Officer Spencer, who’s been with the department for 6 years, has been placed on indefinite administrative leave pending an investigation into his actions. His partner, Christopher Watson, is not on leave.

Bennett’s mother told the Dallas Morning News she wants justice for her son. “It’s the officers that need something done to them,” she stated. “This is not right. Any way I see this is wrong.”

RELATED: Why Are Police Beating Up Disabled People?