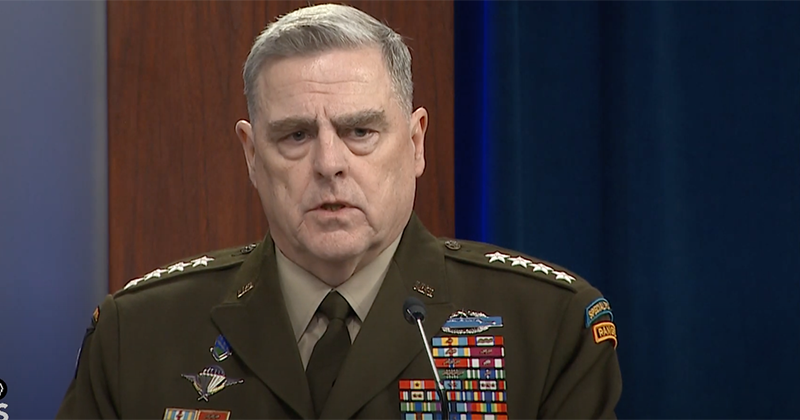 The Pentagon is investigating the possibility that the deadly coronavirus, which is now killing thousands of Americans every day, came from the biological research laboratory in Wuhan.

Gen. Mark Milley, Chairman of the Joint Chiefs of Staff, has confirmed that the DoD is looking into the theory that the virus was leaked out of the Wuhan Institute of Virology (WIV).

Milley made the comments at a press briefing broadcast by PBS Tuesday.

Watch from the 19 minute mark:

“There’s a lot of rumor and speculation in a wide variety of media, blog sites, etc.,” said Milley, adding “It should be no surprise to you that we have taken a keen interest in that, and we have had a lot of intelligence take a hard look at that.”

“At this point it’s inconclusive, although the weight of evidence seems to indicate natural, but we do not know for sure,” Milley added.

In a separate interview Tuesday, Secretary of State Mike Pompeo was also asked about the notion of the virus leaking from the lab, and did not rule out the possibility.

Pompeo was asked by Tony Katz of The Morning News “Does the State Department believe that China absolutely purposefully engaged a virus, or is there a belief that there was a leak from a virology lab in Wuhan, and China did not let the world know about it until it was too late?”

Pompeo responded “Look, there’s still lots of work to be done to find out precisely what happened here, precisely how this came to be. We know this much: We know this is a global pandemic that originated in Wuhan, China. We know that there were wet markets there. So we’re beginning to piece the facts together.”

The developments dovetail with a report in the Washington Post Tuesday detailing how U.S. Embassy officials in China visited the Wuhan Institute of Virology in 2018 and subsequently issued official warnings to the State Department about the inadequate safety at the lab, where researchers were meddling with bat coronaviruses.

"The first cable, which I obtained, also warns that the lab’s work on bat coronaviruses and their potential human transmission represented a risk of a new SARS-like pandemic."https://t.co/kgwc21YwBP

In addition, Documents obtained by the Daily Mail last week confirm that Communist China had been harvesting, developing, and testing novel coronaviruses on mammals using grant money from the U.S. government under former President Obama.

“There’ll become a time to review precisely what happened, to investigate, get all the facts, and hold accountable those who were responsible for this enormous, not only loss in human life but the economic damage that’s been done here in the United States as well.” Pompeo added.

The Secretary also declared that the Chinese government has “simply not lived up to their obligations to the international organizations.”

To be clear, there is a general consensus among experts and government officials in both the U.S. and Britain, that the lab in Wuhan could be the source of an accidental leak of the virus due to its lax safety procedures.

Richard H. Ebright, a professor of chemical biology at Rutgers University, told The Daily Caller that he believes it is a distinct possibility that an accident in the laboratory in China could have caused the outbreak.

Lawrence Sellin Ph.D., a retired colonel with 29 years of service in the U.S. Army Reserve, who previously worked at the U.S. Army Medical Research Institute of Infectious Diseases, has also said that the origin of the virus is more likely to be a lab leak, arguing that “the technology to create a coronavirus chimera has been demonstrated,” and “deadly viruses have previously ‘leaked’ out of Chinese virology labs in two separate incidents.”

That is not to say that they believe it was a bio-weapon that was intentionally used by China, another wilder theory that has been promoted by the likes of bioweapons researcher Dr. Francis Boyle.

The accidental leak theory is also supported by the fact that according to a study contributed to by the ‘bat-woman’ herself, Shi Zhengli, the novel coronavirus is 96.2% identical to a viral strain that was detected in horseshoe bats from the Yunnan Province, which is over 600 miles away from Wuhan.

Separate Chinese research confirmed this and cited testimonies from close to 60 people who lived or stayed in Wuhan for lengthy periods, saying that the bat “was never a food source in the city, and no bat was traded in the market.”

The research paper, which was uploaded to Research Gate on Feb. 6, concluded that “The killer coronavirus probably originated from a laboratory in Wuhan.”

The paper was removed from Research Gate on Feb. 14 or 15, according to internet archives, and it’s author cannot be reached.

A deadly virus leak from a Chinese lab is not unprecedented. The SARS virus escaped twice from the Chinese Institute of Virology in Beijing in 2004, one year after its spread was brought under control.

Many believe that China’s continued subterfuge regarding the coronavirus outbreak, and it’s bizarre accusations that it was spread by the US military, is an effort to divert attention from the possibility that this virus leaked from the Wuhan lab.