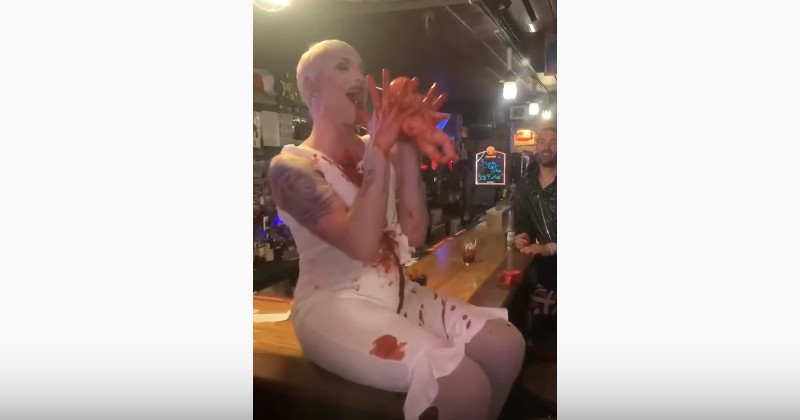 Video out of New York shows a drag queen simulating cutting a baby out of her womb, drinking blood and pulling its head off as onlookers in a bar cheer.

The clip shows Blair Back during a performance of a drag show at an unnamed bar in New York.

She then removes a plastic baby before pouring some of the blood into a glass and drinking it.

Back then pulls the plastic baby’s head off before licking its face.

The music playing in the background during the entire ‘performance’ is ‘Cannibal’ by Ke$ha.

Some witnesses looked shocked but many could be heard cheering in the background.

After the video went viral on Facebook and prompted a backlash, Back tried to defend herself by asserting, “No babies were harmed in this video. The baby is made of PLASTIC!!! I’m wearing a pregnant belly costume I got online!!! The blood is fake!!! And the organs r fake as well!!!!!”

However, most respondents were unimpressed, commenting that the spectacle was “sick” and “disgusting” while another said Back was “totally demon possessed.”