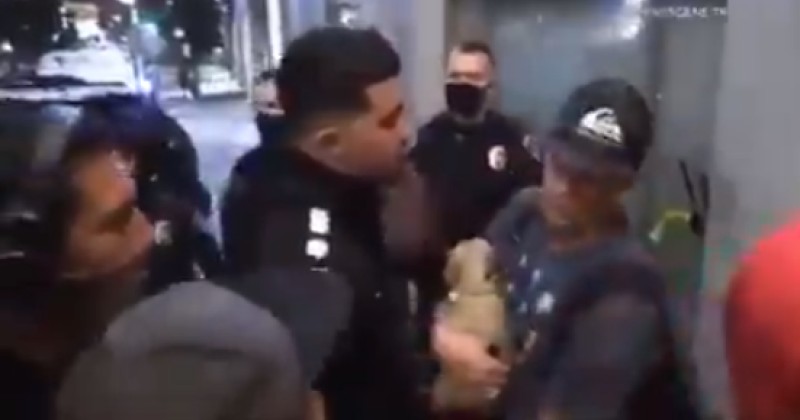 A video from a recent BLM protest shows far-left demonstrators physically attacking a man holding a puppy and then telling other activists not to film the incident.

The start of the clip shows the man holding the puppy surrounded by a mob who scream at him, “You’re not welcome here!”

Man with a puppy in his arms is harassed by BLM/Antifa Marxists shouting "you're not welcome here", he is then knocked out by them, and cries of "don't record that shit" can be heard as they didn't want this aired, scum. Follow #JackDawkins here https://t.co/ARod7fxByJ pic.twitter.com/CUGT54pv3K

A woman then repeatedly tells him “please go” as he begins to walk away before calling the mob “fucking idiots.”

After the man walks around the corner, he is surrounded by another group and violently knocked to the ground. The mob seemingly has no concerns about harming the puppy.

Most of the mob seem more concerned about the incident being caught on camera than the safety of the puppy or the man, with several insisting, “Don’t record it!”

Make this viral. His puppy's gone, too. Tell me again how im supposed to sympathize with this movement?#FBLM #BlueLivesMatter #BlackLivesMatter #antifa and #soros #PureEvil pic.twitter.com/VQ3UM5PZ91

“Put your phones away!” screams another woman, presumably concerned about the optics of violently assaulting a man who is holding a defenseless animal.

“Don’t film me!” insists another protester as the man is seen semi-unconscious on the ground.

And remember, folks; These are the good guys!