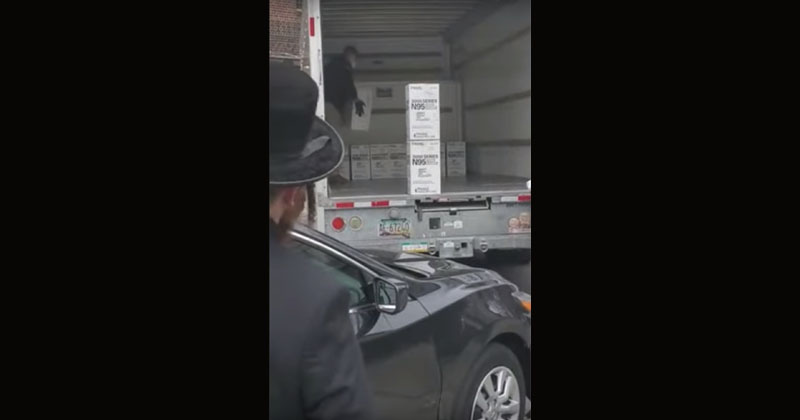 Video out of New York City shows FBI agents loading up a truck full of N95 masks reportedly hoarded by a Brooklyn man.

The footage shows half a dozen FBI agents carrying boxes labeled N95 into a truck as several Orthodox Jews look on in a Brooklyn neighborhood.

43-year-old Baruch Feldheim, believed to be the suspect behind the hoarding, coughed on the FBI agents after they arrested him Monday.

Agents discovered Feldheim intended to sell the equipment at a 700% markup.

“After identifying themselves as FBI agents, they told Feldheim that they wanted to stay a distance away from him given concerns over the spread of Coronavirus,” the DOJ said in a statement. “When the agents were within four to five feet of him, Feldheim allegedly coughed in their direction without covering his mouth.”

This comes after Attorney General William Barr announced punitive measures against any individuals or organizations hoarding N95 masks or other PPE equipment.

“We have started to see some evidence of potential hoarding & price gouging,” Barr said at a White House coronavirus briefing last week. “So, earlier today the president signed a second executive order providing the authority to address…hoarding that threatens the supply of those necessary health and medical resources.”

“If you have a big supply of toilet paper in your house, this is not something you have to worry about. But if you are sitting on a warehouse with masks, surgical masks, you will be hearing a knock on your door,” Barr said.

Over the weekend hundreds of citizen journalists went to their local hospitals to show how they have become ghost-towns and posting to the #FilmYourHospital on Twitter.