Fox News reporter Jesse Watters tracked down Dan Goldstein, now infamous for the outrageous conduct of he and his husband, Matthew Lasner, who berated and menaced Ivanka Trump and her three small children while aboard a JetBlue flight last month.

When confronted by Watters, the cowardly Goldstein, who is a lawyer, covered his face in shame, and refused to answer any questions before scurrying into his New York City residence.

“I wanted to talk to you about your behavior on the flight, sir,” Watters began. “Do you regret verbally abusing Ivanka Trump on the plane?”

“You harassed a woman with her baby on a flight. Are you proud of that? Real class act, aren’t you? Now you’re afraid to show your face?”

As Goldstein rushed back into his building, Watters offered him a final chance to redeem himself.

“I’m giving you an opportunity to apologize. Nothing to say?”

Watters visited Hunter College, where Goldstein’s husband Lasner is a professor, to gauge students’ opinions on the behavior of the two vicious crybullies, and whether or not the school should take disciplinary action against Lasner.

He also briefed the students on a Change.org petition that has been signed by over 62,000 respondents at the time of this writing, seeking that the administration penalize Lasner for “his immature and cruel harassment of Ivanka Trump and her family.”

“The fact that someone who would be involved in such conduct is teaching students is very troubling,” the petition states. “Someone like Mr. Lasner, who would harass a mother and her child simply trying to go about their day, does not deserve the honor of teaching.”

“The fact that he tried to cover up and change the story around to avoid the consequences of his actions is also a testament to his character. He is NOT a good example for our youth.”

During the original incident in December, Lasner took it upon himself to proudly live-Tweet Goldstein’s premeditated attack on Ivanka, during which he snapped, “Your father is ruining our country. You should be flying private. Now you are ruining our flight.” 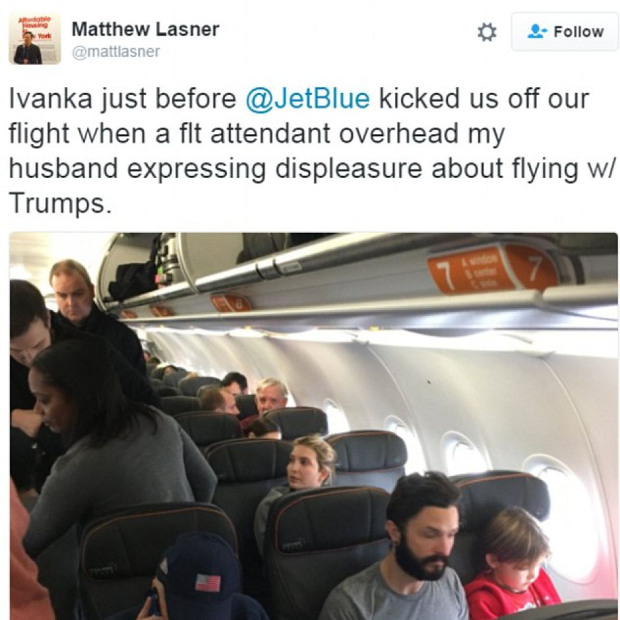 These Tweets have since been deleted.