Magazine article literally asks, “Do you have what it takes to pull the trigger on a fellow citizen?”

The latest installment of the popular Rainbow Six video game franchise casts Americans fed up with government corruption and banker domination as domestic terrorists intent on carrying out killings and bombings, yet another startling indication of how media is influencing the public to accept protesters and people generally upset with the way their government is being run as the new terrorist threat.

“In Tom Clancy’s Rainbow 6 Patriots, Team Rainbow faces a new and very real threat called the ‘True Patriots,’ a highly-trained, well-organized revolutionary group that claim the American government is irrevocably corrupted by greedy politicians and corporate special interests. The True Patriots will do whatever it takes to reclaim their country,” Ubisoft’s description of the game states.

From the December 2011 issue of Game Informer:

“Americans are angry and why shouldn’t they be? With an exponentially expanding national debt, crippling foreclosures, corporate bailouts, degrading infrastructure, dwindling job market and widening income gap between the haves and have-nots, it’s getting harder to believe politicians when they speak of American exceptionalism as if it were a fundamental truth.

“In response to gradual erosion of our beloved nation, resentful citizens of all kinds of political backgrounds are rising up in the form of new political movements like the Tea Party and Occupy Wall Street.”

Reading further in the magazine’s short intro for the game, we find the real motivation behind the game’s inception.

“In 2009, the Southern Poverty Law Center reported a massive resurgence in anti-government paramilitary groups, which have jumped from 43 militias in 2007 to nearly 300 in 2010. The sudden surge has captured the attention of the Department of Homeland Security, NSA, CIA, and FBI, who all view these groups as a real threat to the stability of the nation. Moreover, many of these disenfranchised groups frequently put their members through intense military training exercises – for what, no one knows.”

In their final introductory paragraph, the Game Informer writers ask, “Do you have what it takes to pull the trigger on a fellow citizen?”

Rainbow 6: Patriots was announced in 2011, but its actual release has been held back. When GameStop pulled pre-sales from its database without explanation, some speculated the game had been shelved entirely.

However, in a June 2013 interview with IGN, Ubisoft senior vice president of sales and marketing Tony Key confirmed that Rainbow 6: Patriots would likely be held over for next-gen systems like Playstation 4 and Xbox One.

A look at the game’s trailers shows players that play as members of the Rainbow Six squadron will have no choice but to shoot innocent people (and even police officers) in certain situations. According to Game Informer, players will also have the opportunity to play as the terrorists.

This is just the latest example of an ongoing media campaign to demonize Constitutionalists and those seeking to uphold the principles of the Founding Fathers of the nation, as terrorists.

Earlier this year, we reported on how the cable TV network AMC was producing a show titled, “We Hate Paul Revere,” following two brothers that hate the famous patriot activist who became a hero during the American Revolutionary War when he went on his “midnight ride” to warn patriots and patriot militias that the British were coming.

In March, we also discussed how the Fox TV series “The Following” attempted to portray Constitutionalists and militia members as serial killers and terrorists.

Add these “coincidences” to a July 2012 report we wrote covering a DHS study that characterized Americans who are “suspicious of centralized federal authority,” and “reverent of individual liberty” as “extreme right-wing” terrorists, and you begin to see a pattern.

Recently, the Internal Revenue Service was also forced to apologize for targeting patriot and Tea Party groups with extra scrutiny and audits when they applied for tax exempt status.

As the federal government further embroils itself in scandal after scandal, and as it takes huge strides to implement a hellish vision of a free society, using an unchecked police state as its muscle – now police in New York can arrest you for merely annoying them, and recently the Supreme Court ruled that police can take DNA swabs from citizens as a “legitimate police booking procedure” – the desperation to stifle opposition has become readily apparent.

Watch the propaganda slickly disguised as a video game in the preview below: 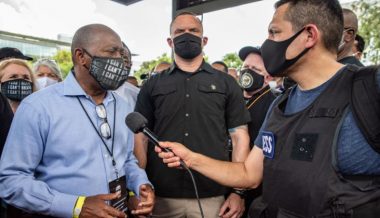